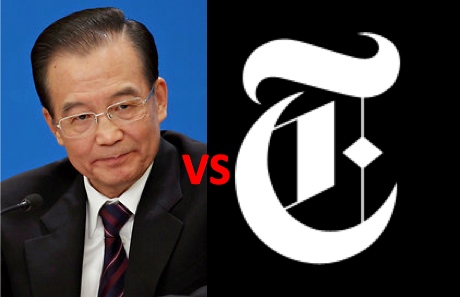 The lawyers for the Wen Jiabao family issued an official statement yesterday regarding the New York Times’s recent piece that got the website harmonized inside China. It’s “a rare instance of a powerful Chinese political family responding directly to a foreign media report,” NY Times reports. But the lawyers, while trying to deny everything, actually deny nothing. Read the translated statement closely, as brought to you by SCMP:

Entrusted by the family members of Wen Jiabao, we hereby issue a statement regarding the New York Times’ untrue report about Wen Jiabao and his relatives:

I. The so-called “hidden riches” of Wen Jiabao’s family members in the New York Times’ report does not exist.

III. The mother of Wen Jiabao, except receiving salary/pension according to the regulation, has never had any income or property.

V. Other relatives of Wen Jiabao and the “friends” and “colleagues” of those relative are responsible for all their own business activities.

VI. We will continue to make clarifications regarding untrue reports by the New York Times, and reserve the right to hold it legally responsible.

I. Of course they don’t exist. They’re right out in the fucking open!

II. Some of Wen Jiabao’s family members don’t do business. These “some” — who don’t do business, or did you not hear us the first time? — do not hold shares of any companies. Allow us to quote someone who speaks at your level, so that you understand: “Can I make it any more obvious?” –Avril Lavigne

III. Wen Jiabao’s mother is a freeloader whose only good deed in life is giving birth to Wen Jiabao. That woman is a saint.

V. Some of Wen Jiabao’s family and friends do business. Wen Jiabao does not speak, interact, or otherwise think about them. What, you think he has that kind of time?

5 Responses to “The Official Denials Have Begun In Wen Jiabao vs. New York Times”

Leave a Reply to D