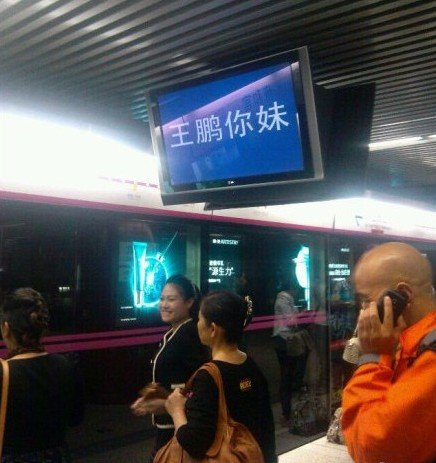 Via Shanghaiist: “Screens on Beijing subway’s Line 5 all began displaying ‘王鹏你妹’ (‘Wang Peng, your sister’, equivalent to ‘your mother’ or ‘fuck you’ in English) this morning due to a ‘system error’ according to transport officials.”

No time to waste. Links!

In a basketball game featuring Chinese premier Wen Jiabao, would you guess that his team won or lost? “Premier Wen Jiabao, 70, clad in a white sleeveless basketball jersey, matching shorts and sneakers, remarkably casual attire for a top Chinese leader to appear in public, played basketball in a match, which was held on Oct.3 with the aim to enhance the national fitness during the National Day holidays. // The white team, Premier Wen was in, beat the red team with six scores. The spectators all cheered for the premier’s marksmanship, as he was seen shooting a basketball properly twice consecutively.” [Sina English]

CCTV channels its inner Michelle Branch, asks, “Are you happy (now)?” “On September 30, when asked ‘do you feel happy?’ (你幸福吗), an elderly migrant worker literally could not believe he was being asked about his well-being and answered instead, ‘My surname is Zeng,’ apparently mistaking the question to mean, ‘Is your surname Fu?’ (你姓福吗) // Other interviewees took the question as a joke and ran with it. When a CCTV reporter asked a young man about his life’s biggest regret, the man answered, ‘We still haven’t claimed sovereignty of the Diaoyu Islands.’ On the same day, at a railway ticket office, when asked ‘what’s the worst thing you’ve encountered,’ a college student shot back, ‘As I was getting interviewed by you, someone cut in line right before me.’” [Tea Leaf Nation]

Netizens would prefer Mo Yan not win the Nobel Prize for Literature. “Another reason why many Chinese netizens think Mo Yan’s chance of winning is slim is that they see Haruki Murakami, popular Japanese novelist who is also in top places for this year’s prize, as a much better writer. Like netizen Sheldon殷明 commented: ‘Honestly, Mo Yan is a good writer, probably one of China’s top 10 best writers still alive. But Haruki Murakami is way better.’ 苦蚕 said: ‘The judges must be blind if they pick Mo Yan out of Mo Yan and Haruki Murakami.’ // Haruki Murakami aside, many netizens don’t even see Mo Yan as China’s best. Like  netizen 嘲风大圣 commented: ‘If any Chinese writer deserves a Nobel Prize for Literature, it won’t be Mo Yan. Writers like Yu Hua, Jia Pingwa and Wang Shuo are all way better than him.’” [Offbeat China]

Camels are not toys. “Several camels at a tourist hot spot in Northwest China have died from receiving a record-high number of visitors during China’s eight-day holiday.” [Ministry of Tofu]

A suicide not prevented. “At 9:19 p.m., the netizen took to Tianya’s BBS to proclaim: “Those friends who will miss me and wish me well, may you enjoy happiness, health and longevity.” Initially, responses ranged from those accusing him of simply seeking sympathy to those trying to talk him out of it. // The netizen posted several photographs of his final hours, including those of some empty beer bottles he claimed to have drunk. After the third bottle, he claimed that after drinking the sixth he would have the courage to hang himself with a belt. // Police from Xiangmihu Police Station arrived at his home around 11:30 p.m.by which time he was already dead.” [The Nanfang]

Foxconn fallout: “For me, though, one thing is clear: don’t trust anything written immediately following any sort of labor disturbance, particularly one involving Foxconn; it’s bound to be incomplete. And if the word ‘iPhone’ is in the article, it’s automatically less credible, at least in terms of comprehensiveness. If it’s the latest iPhone model, in this case the iPhone 5, I’m not even sure the article is worth reading. // Some editors out there seem much too willing to jump on a pre-existing narrative that involves Apple/Foxconn and labor disputes, to the point that whole stories are written before the facts become known.” [Stan Abrams, China Hearsay]

Don’t ever travel during Golden Week. Noted. “Trains are expected to carry a total of 7.7 million passengers Saturday while the country’s roads are dealing with a combined passenger volume of 80.81 million, a year-on-year rise of 7.6 percent, according to the ministries of railways and transport. // On Saturday, Beijing reported a 25-percent growth of inbound passengers from Friday on the Beijing-Shanghai Expressway while Shanghai witnessed a 10-percent rise in inbound passengers.” [Global Times]

Hmm. “Britain’s young deaf community are replacing ‘offensive’ signs to avoid the risk of upsetting certain groups of people, it has emerged. // Traditional hand signals for the words for Chinese people, homosexuals or Jews play on stereotypes that are deemed to be offensive and are no longer seen as culturally acceptable among groups of under 30s. // Experts from the Deafness Cognition and Language Research Centre (DCAL), based in London, have revealed that deaf people aged between 16 and 30 generally no longer sign a slanted eye when they are referring to the Chinese community, nor do they mime a hook nose when referring to Jewish people.” [Daily Mail]

A story about Yu Hua that I wish weren’t buried behind a paywall. [Ian Johnson, The NY Review of Books] 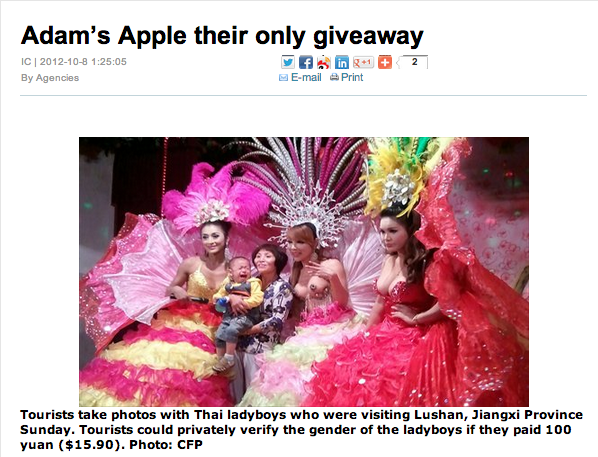 And one more: look who attended the China Open alongside Maria Sharapova and Victoria Azarenka (via Sohu) 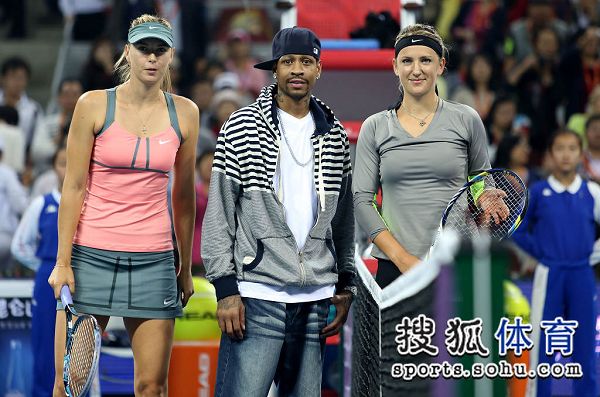