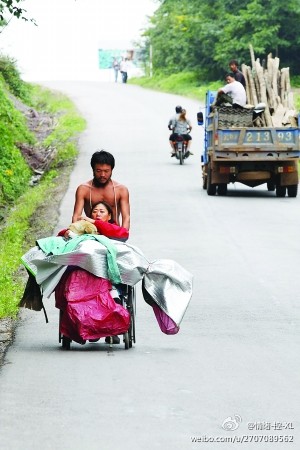 This is your story of the day, week, and month. As posted to Sina Weibo a few days ago, Fang Meng tells this extraordinary tale that needs no further embellishment. A feature published on Qianlong Net yesterday has more details as well, from which we’ll sample.

On July 8 of this year, 53-year-old Kou Minjun — who hasn’t had many opportunities to travel ever since her divorce more than a decade ago — said to her son, “The place I want to visit the most is Xishuangbanna.” She had said this offhand, not imagining that Fan, 26, would quit his job the next day and that they would embark three days later on the trip of a lifetime. Also tagging along was their dog, Butterfly.

The family traveled exclusively by foot/wheels, and more than 100 days later — and 3,359.8 kilometers, to be exact — they arrived at their destination. Here’s mother and son in Xishuangbanna on Friday: 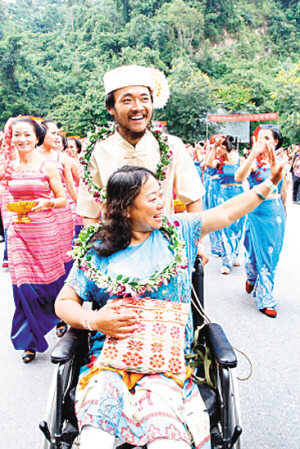 In the first few weeks of the journey, the family slept in a tent. It was only when they discovered that motels only cost 20 to 50 yuan that they began renting rooms. “We haven’t had much experience going out, didn’t know that hotels were so cheap,” Fan said.

They encountered several pitfalls along the way, as can be expected, including temperatures that exceeded 50 degrees Celsius (122 degrees Fahrenheit) in central China, and torrential downpours in the south, and roads so bumpy and littered with potholes that rolling a wheelchair along it felt like “driving bumper cars.”

Yet despite all the difficulties, Fan recalls riding in a car only three times:

In Hebei in July, where it must have felt like an oven, the wheelchair got a flat tire, and Fan did not know how to replace it. Then in Zhengzhou, Henan province, a family friend took them 70 kilometers by car to see the Shaolin Temple. Two months later in Guizhou province, on a highway under repair and practically sealed off, a warm-hearted driver practically smuggled them into his vehicle and drove them to their destination.

“There were so many good people along the way,” Fan said with a sigh, recalling how farmers would give them fruit, and restaurant and inn owners would set them up with free food and accommodation. “The happiness and joy far exceeded the hardships experienced on foot.”

If ever there were a time where the phrase “it’s not about the destination but the journey” could be applied, it’s here.

But that’s not all. Fan said he has one more dream: “When I get back to Beijing, I want to establish for my mom a motorbike tour group for disabled people. It’ll have four or five members, with people to maintain the vehicles, and in charge of food and lodging, and responsible for making an overall plan. This will enable those with physical handicaps to also go wherever they want.” 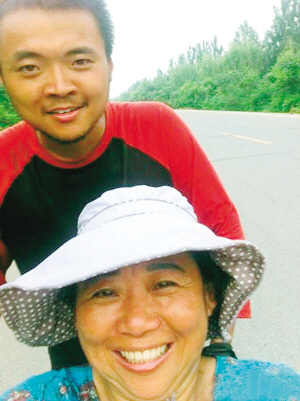 If China has any publisher or movie producer worth his salt, Fan and Kou should already be signed up for a book and movie. We’ll keep an eye out for videos in the coming days.

5 Responses to “Here’s The Story Of A Wheelchair-Bound Single Mother, Her Son, Their Dog, And An Incredible 3,000-Kilometer Journey From Beijing To Yunnan”