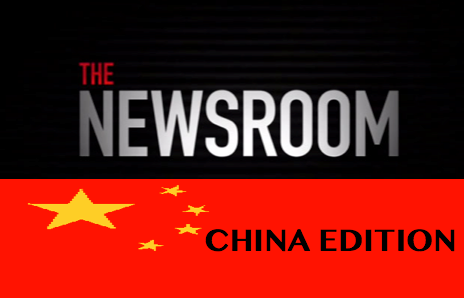 By TAR Nation and RFH

Ed’s note: TAR and RFH have diametrically opposed opinions about Aaron Sorkin’s The Newsroom, starring Jeff Daniels as a news anchor who, in one lapse of honesty, sees his world turned upside-down. Characters sing “arias of facts,” as the New Yorker’s review put it, which sounds a lot like what news organizations closer to home — in China — do. So, TAR and RFH set aside their disagreements about The Newsroom to write a pitch for a show called Chinese Newsroom. TV producers out there: pick this up!

The series begins with its star, Yang, a completely sober and non-medicated popular CCTV host, blowing up at a university forum with a racist tirade about all foreigners. He later proudly boasts of this incident on Weibo. Nothing happens.Yang later crashes his car and is found with his cock hanging out. The episode ends on a cliffhanger, as producers decide whether to ignore the incident or simply pretend it never happened.

News surfaces that a senior Chongqing policeman has defected to the US Embassy – and one of the producers has an inside source at the consulate with Wang ready to go on the record. With one of the most important scandals in China breaking, the station bravely decides to go with a single-sourced expose about how Chinese food is even better than previously thought.

The London Olympics are on, and it’s clearly one of the most interesting things that has ever happened – but it’s still nothing like as good as the 2008 Games. The files of Olympic tales from 2008 are dusted off and the names replaced. At the editorial pitch meeting, the team gathers round to watch archive footage of the 2008 pitch meeting.

Yang presents a solemn face to the world as he attends his mother’s funeral, his expressionless features concealing an inner maelstrom of despair over where she hid her jewelry. But the mask drops when news reaches Yang that the charade involving hurdler Liu Xiang’s fall at the Olympics has come to pass, and the handsome host falls to the ground in patriotic grief. Back at the newsroom, a debate ensues as to the ethics of broadcasting locker-room footage of Liu curled up naked inside a Chinese flag, sobbing like a schoolgirl. It’s agreed that it’s fine, so long as they show it “a lot.”

Something horrible happens in a democratic country, and the CPC’s official line is that it is because of free speech. However, events take an unexpected turn when the filing cabinet containing the canned responses gets stuck. A brilliant young journalist, sidelined for reporting on the heroic story of an Olympics silver medalist, suggests writing a fair and balanced story on the incident. But in this emergency, the station has no choice but to read the previous day’s Global Times on air.

Episode 6: Btw, your vagina is now my ancient sovereign territory

In protest of the Japanese maritime claim, the Chinese take to the streets to beat each other up and burn their belongings. Back in the office, newscaster Yang promptly threatens to fire a reporter, Wei Wang, for visiting Kyoto in 2007. She writes a Maoist apology letter to him that so moves Yang emotionally that he decides to instead seduce her. As a reward, she is sent to cover traditional grass-growing in Xinjiang.

Episode 7: Diaoyu and me

The Chinese Newsroom canteen discusses exactly how much the Diaoyu Islands are part of China. (SPOILER ALERT: It’s a lot.) Oh yeah, and it’s live on air.

Episode 8: Being sensitive doesn’t mean I have feelings

While digging through an old filing cabinet looking for more ways to shit on the US, Yang is handed a list of sensitive subjects that he is NOT allowed to discuss on their air. The list is 7,896 pages long. He laughs with nationalistic zeal – until he sees his name on the list! Rushing up to the head office, he bursts through the door to complain, only to realize that no one in the newsroom will talk to him, with him, in front of him – or about him. He is, simply, too sensitive. Yang knows this is a public death sentence, worse even than the time he fell dead-drunk asleep at a banquet in honor of Deng Xiaoping and insouciantly shat his pants. Once someone is “sensitive,” it means no one can talk about him, her or it until the generation who decided it is dead and their precious hurt feelings can be spared. Who is responsible? Who knows – the show gets cancelled mid-season.

3 Responses to “What If Aaron Sorkin’s “The Newsroom” Were Set In China?”