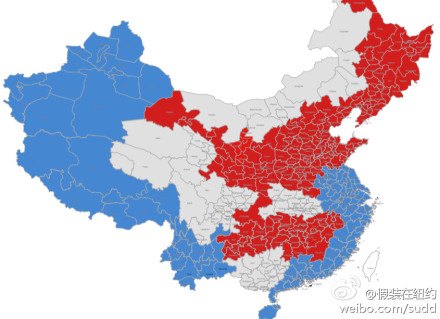 Nerds of 20th-century Chinese history will love this. Brought to us by the good folks of Tea Leaf Nation, this image on Sina Weibo imagines what would happen in an election between Mao Zedong’s Communist Party of China (red, obviously) and Chiang Kai-shek’s Kuomintang, which fled for Taiwan in 1949. Via TLN:

The “election” began in earnest on November 8 when a widely-followed wit with a handle meaning “Pretending to be in New York” (@假装在纽约) asked what might happen if China had a democratic election. He wrote to his 200,000-plus followers, “If China also had a national election, Zhejiang, Chiang Kai-shek’s birthplace, Fujian and Taiwan would for sure go deep blue [for the KMT], while other southeast coastal provinces would also be a huge blue heartland; northern, northeast China and other revolutionary bases for the CCP would certainly go red; mid- and south-western China would be the dead heat swing states. Ready to be phone banked and canvassed!”

The post soon went viral, attracting over 3,000 comments and 8,400 reposts in a day’s time. He Weifang (@贺卫方), a law professor from elite Peking University, wrote, “Competing for power peacefully; how great it is to let people decide!”

Just yesterday, we saw how Barack Obama’s victory speech on Tuesday resonated with Chinese citizens. Say what you want about an election cycle that drains so many resources, but it’s uplifting to know that American politics can inspire people halfway around the world. Isn’t it pretty to think so, anyway?

It’s unclear how long Chinese censors will let this Weibo post stay up. I’m surprised it’s been this long. I’m also surprised to see so much support for the KMT, considering it was just as corrupt and ham-handed as the CPC is today.

Despite the near certainty that Chinese censors are aware of this discussion thread, many users publicly stated that they would vote for the KMT, while Communist Party supporters largely stayed away from the discussion. Some users predicted that the blue (KMT) vote would sweep the entire nation, and suggested painting the whole map blue. Indeed, some users hailing from the assumed solid red heartland declared that they too would vote for the KMT. As @mely04919 from the city of Tianjin opined, “Though born in a red [area], I am a die-hard blue fan.”

It seems to me that far from a vote for the KMT, it’s a vote of no confidence in the CPC. That’s not unusual: people rail against the Communist Party all the time here. Let’s just say if 1949 KMT faced off against 2012 CPC, Ralph Nader might win.

But that’s the strongest selling point for democracy, isn’t it? Mandate comes not from heaven or birthright, but the people. Given a bit more accountability, who knows how much better the delegates and future leaders of this country, currently in Beijing, can be. For now, we can only speculate, and imagine.

6 Responses to “An Imagined Chinese Electoral Map, If China Were A Two-Party Democracy”