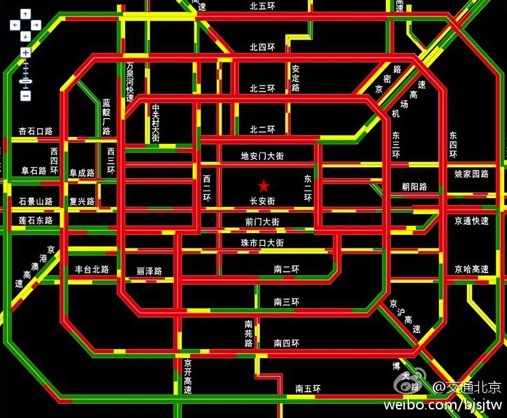 As if we needed more proof that it’s difficult getting from point A to B in this city, here’s documented proof. Via Global Times:

It took Beijingers an average of 52 minutes to commute to work this year, the longest journey time among 50 cities nationwide, according to a report from the Chinese Academy of Sciences, reported the Legal Mirror Wednesday.

The report blamed most commuting problems on the public transport network not keeping up with development.

Obviously the sheer number of cars on the road is a problem, but this Sina article implies that public transportation deserves some blame as well. But the real problem? Attitudes.

Rumors are that the government is considering removing half of the city’s private cars from the road — odd/even license plates, like during the Olympics — and here’s one person who is very unhappy about it:

“Traffic control has already brought inconvenience to people, and it is ridiculous that the government wants to increase the inconvenience further,” said Zhao Xiaotong, 22, from Beijing.

Ms. Zhao is being very optimistic with her last statement — either that or she thinks public transportation means getting picked up by a chauffeur. It’s true that some subway transfer stations are too large, but let’s face it, some people could use the exercise. What we don’t need are wider thoroughfares (they don’t work), or anyone defending the idea that adding cars to this city’s roads is acceptable.

The problem is mindset. People like cars because traditional thinking is that cars are a necessary part of middle-class life. This mentality — like so many others — will change with time. In the present, though, we can only grumble, and perhaps laugh.