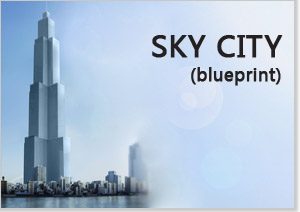 In June, a company called Broad Sustainable Building went on the record as saying it would build, starting in November, the world’s tallest skyscraper in just 90 days. Sky City, located in Changsha, Hunan province, will be a 220-story behemoth standing 2,749 feet (838 meters) when complete, 10 meters higher than Dubai’s Burj Khalifa… which took five years to build.

November is here, and construction is expected to begin soon. This has given everyone the chance to double down on doubts of Broad’s 90-day guarantee. Gizmodo’s Jesus Diaz writes:

To be honest, it all seems like a tall tale to me—no pun intended. Although the credentials of the company seem to be quite serious, one thing is to build a 30-story hotel in 15 days and the other is to built the largest skyscraper in the world in 90 days. It just boggles the mind. Maybe it was April’s Fool in China yesterday.

But the company isn’t backing down. It “insists that it will deliver its 220-storey Sky City within the targeted 90 days, rather than in 210 days as rumoured in the media,” reports Construction Week Online. And if anyone has experience popping out buildings in record time, it’s Broad.

In May, they built a three-story building in nine days — which engineers said was actually eight days more than they anticipated needing. And last December, as seen in a now-famous timelapse, Broad erected a 30-story hotel in a mere 360 hours, or 15 days.

One might argue the merits of insisting on a short timetable for such a lofty project. But not Broad’s senior VP, Juliet Jiang, who told Construction Week Online they “will go on as planned with the completion of five storeys a day.”

Forgive him for his confidence — or is it hubris? So far, none of Broad’s buildings, constructed at similar breakneck speeds, have collapsed. But you know what they say about that thing that goes before the fall, right?

Sky City is expected to be complete by next March.