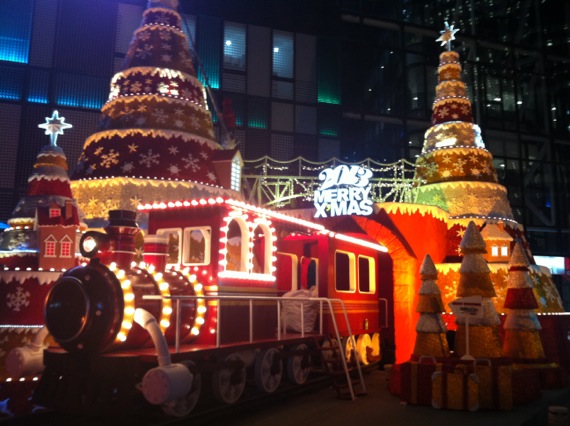 You might not know it yet (or maybe you do), but it’s definitely Christmas season in Beijing. This is either good or bad. We’ll let you decide over links.

Doesn’t sound good. “If you’re worn out worrying about Syria, Gaza, Iran, you name it, I give you: the announcement today by police on China’s large southern island of Hainan that, starting on January 1, they will assert a right to stop and board any vessel they consider to have violated China’s very expansive claim of territorial waters in the South China Sea. // …Let’s hope the Hainan diktat will just go away, or will not be enforced, or will be dismissed in Beijing as some oddball over-reach by authorities in the far south. A Chinese government deliberately courting this kind of showdown would be a very bad sign.” [James Fallows, The Atlantic]

Corollary: “Today Vietnamese and Chinese are arguing with each other over who has ‘sovereignty’ over certain islands in the East Sea/South China Sea. In some instances they are trying to demonstrate ‘who was there first,’ but in reality, neither were. // For many centuries before any Vietnamese or Chinese entered those waters, that region was the home of various Austronesian speakers, people who referred to islands by, among other terms, the word ‘pulau.’ // Indeed, a better name for that body of water than the East Sea or the South China Sea would be the ‘Austronesian Sea.’” [Le Minh Khai's SEAsian History Blog]

Interview with the man with the sex tapes. “’I am very happy when I battle corrupt officials,’ Mr Zhu told the BBC in a phone interview. // …’Some people think the Party’s attempt to deal with its own corruption problems is like beating your right arm with your left arm,’ Mr Zhu said. // “In our system, anti-corruption measures have to involve the participation of the people. You cannot do it behind closed-doors using illegal procedures.” [BBC]

China’s Julian Assange? “Zhu Ruifeng fancies himself a Chinese version of WikiLeaks founder Julian Assange, a citizen journalist who is plying his trade online. // In 2006, he started the People’s Supervision website, which breaks stories about official corruption in China. He has had a couple of scoops — one about the widespread use of expired vaccines and others about crooked party apparatchiks — but nothing that’s gotten the reaction of a sexually explicit 36-second video released last week.” [Barbara Demick, LA Times]

“What we get wrong about China.” “The problem is that there is a general (and misplaced) belief that China will always be a loser, that it can only imitate, not innovate. Critics argue that its society is too top-down and that American innovation will always be buoyed by Silicon Valley. // But the reality is that it is naïve to believe China cannot narrow the gap in innovation, and the second Obama administration would do well to consider that America could actually learn a thing or two from across the Pacific.” [Bhaskar Chakravorti, CNN]

Murder-near-suicide in Tianjin. “Kang Hongqian, 47, was attacked and killed in her clinic on the second floor of the No 1 Hospital, which is affiliated to the Tianjin University of Traditional Chinese Medicine. // Ms Kang was the head of the hospital’s acupuncture department and on duty at the time. Her murder is one of a wave of thousands of attacks in recent years by patients who are frustrated at China’s health care system. // There was no clear motive for the attack, and the assailant, who has not been named, jumped out of a window afterwards, injuring himself seriously.” [Malcolm Moore, The Telegraph]

See, PRC? The NY Times can write positive articles about China. “The word ‘breathtaking’ when applied to a Chinese city too often refers to respiratory-attack-inducing smog. But in the case of Lijiang, population 1.2 million, in the southwestern province of Yunnan, the word takes on its slack-jaw-in-awe meaning.” [NY Times]

Village officials are human, too; can also appeal. “A village official in southwest China’s Chongqing Municipality on Wednesday appealed against a two-year sentence of re-education through labor despite being released after serving little more than a year of his term in a labor camp.” [China Daily]

Kafkaesque. “My friend: Hey, is there any way you could find out if there is a warrant for my arrest in the PRC? // Me: Why do you think I have such high penetrating power? I am only an editor of a journal whose blog is blocked in China. // My friend: I’m serious about the arrest warrant. If I ask them and there isn’t one, then there will be one. If there is one, I can’t go and get arrested.” [Asian Cha]

“Why the Fate of Humanity Rests on a Chinese Middle-Schooler’s Test Scores.” [The Atlantic]

Foreign teachers in China, this is for you. [China Foreign Teachers Union]

Tycoon-martyr Wu Ying as case for reform? [The Guardian]

It’s “you’re.” #annoyed RT @raquelhohn: To the Chinese people sitting behind me SPEAK ENGLISH your in America for Christ sake #annoyed

One Response to “Friday Links: China’s very troubling claims in the “Austronesian Sea,” BBC interviews journalist with sex tapes, and the launch of Smart Beijing”