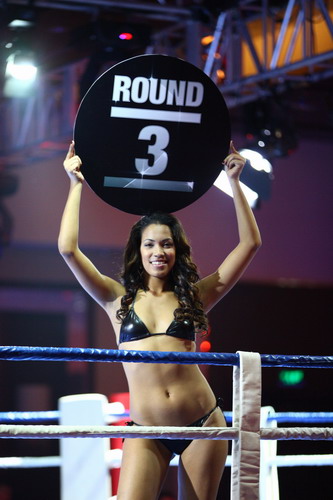 White Collar Boxing was the biggest expat event of the weekend; more pictures via the Beijinger

Need something to do tonight? Our music contributor highly recommends the show My Little Airport, which is playing at MAO Livehouse as part of its “Romantic” China tour. Again, that’s tonight. Otherwise, links.

A Peking University talk about freedom of speech and censorship. “China is currently in the process of losing its ability to speak. // Even animals are practically able to speak. When it stops raining, birds begin to chirp. When flowers blossom, bees buzz everywhere. When spring comes, male wolves smell female wolves and begin to bark excitedly. People, as high-level animals, have mastered the most basic form of speech: “I’m hungry.” Infants cry when they are hungry – that’s the language of infants. Even infants can express when they are hungry, but about 50 years ago, or around 1960 to 1962 for about 3 years, a full 600 million people on this planet somehow could not say they were hungry. You feel hungry instinctively, but you can’t say you are hungry…because that would be disgraceful for a socialist country. With high production, and the ever-correct red sun, we must tighten our belts and give our crops to our brothers; we can’t say that we are hungry. During the Great Famine, the whole nation lost its language. Not only did they lie to their family and friends in political struggles, but they also lied to their own stomachs.” [Li Chengpeng, translated by Liz Carter, A Big Enough Forest]

Wen Jiabao has a sentimental streak. “In a recent speech to members of the Chinese community in Thailand, footage of which was posted to the website thaicn.com on Wednesday, Mr. Wen gave what sounded like farewell speech, despite having another four months at the helm of the world’s second-largest economy. // What was remarkable about the speech was not so much its content as the way it ended. // ‘In the pursuit of truth, I would die nine times without regret. If I’m going to die, I want to die with honesty and integrity,’ he said as he was wrapping up, a paraphrase of his favorite poet, Qu Yuan. To that he added: ‘I hope everyone will forget me – that includes Chinese people and overseas Chinese. Forget me.’” [WSJ]

Could Guangdong go undefeated this year? “If you’re a seven-time champ, you apparently go out and acquire three former NBA lottery picks. No longer a desired player in the NBA, Yi Jianlian turned away from offers in Europe to return to his old romping grounds in Guangdong. He’ll form a trio with Terrence Williams and Ike Diogu, the former of which has the potential to be a walking triple-double on this level. Registerd as a Chinese, Yi will be under no restrictions and should absolutely dominate given the fact that he’ll be matched up against a Chinese on most nights. The same National Team guys are still here: Chen Jianghua, Wang Shipeng, Zhu Fangyu, Zhou Peng, etc. etc. Boasting their best roster ever, will the Southern Tigers go undefeated? Unlikely, but they’re certainly a shoe-in for the Finals and arguably the favorite to lift the trophy in April.” [Jon Pastuszek, NiuBBall]

What won’t parents do for children? “A Chinese couple have uprooted their family from a comfortable lifestyle in the countryside to take up residence in a cramped toilet block in a sprawling city. // Liao Xiaoming, and wife Wang Xuanna took the extreme decision to move to the city of Guangzhou in China’s Guangdong region in order to give their only son a better education. // By becoming public toilet cleaners the dedicated pair are entitled to benefit from nine years free schooling for their child.” [Daily Mail]

After all, graveyards just store the dead, not food. “Though China has a vast expanse of land, it has nonetheless limited arable land, combined with a huge population. Faced with this contradiction, funeral reform was unavoidable. However, the recent tomb-flattening policy has taken on a vast scale. The huge resentment it has sparked is worth further consideration.” [World News Australia]

From our music contributor: “my little airport are a hong kong indie band. ah p plays keyboard and guitar and nicole sings. sometimes she also picks up the slide guitar, glockenspiel, and other instruments. they met while studying journalism in university and write songs in a mixture of cantonese and hong kong english. their lyrics are playful and romantic, and sometimes subversive. for example, they wrote a song called ‘donald tsang, please die’ in 2009 after the politician implied that the 1989 tiananmen incident is less significant than mainland china’s current economic power. but no matter how saucy or charged the lyrics are, they are cloaked in sultry harmonies and melodic tradeoffs between nicole (for the most part) and ah p (always welcome). think belle & sebastian before they were belle & sebastian and just stuart murdoch and isobel campbell singing in a heathery glen or on the banks of some scottish loch. // the duo enjoy a rabid following in the mainland, and organise their own tours. this latest one, in support of their new record ‘lonely friday’ has already seen them play in chengdu, wuhan and shanghai with friday’s gig at mao livehouse the second-to-last stop of their 2012 ‘romantic’ tour. judging by the photos from the other shows on the tour, the over-under on superfans showing up with the panda / raccoon makeup prominently featured on the new record is at least 8.” [Ami Li]

“Why Does China Still Use Fax Machines and Internet Explorer 6?” [Eveline Chao, Motherboard]

Sany, the company that’s suing the US government, is moving from Changsha to Beijing. [China Daily]

Reactions to PSY’s performance at the American Music Awards were somewhat raysissssss racist. Via Public Shaming. 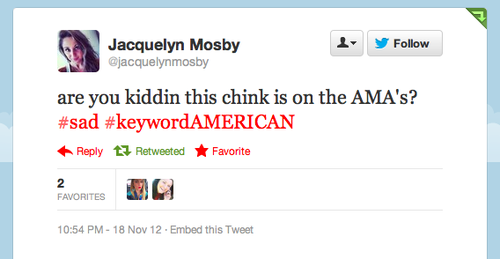