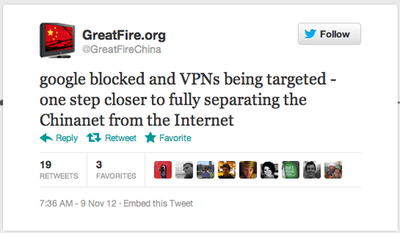 Yesterday, China took down Google, the decision of a Net Nanny who gets off by watching Internet users like you squirm and suffer. But the collective howl of pain and rage that emanated from behind the Great Firewall was actually heard, because this morning, authorities unblocked Google’s services, including Gmail.

So what happened? The website GreatFire.org – which we wrote about it in March and has been our go-to site for checking censorship within China ever since — asks the same thing in a post titled “Google unblocked again – was it a mistake or a test?“:

The DNS poisoning that was imposed on most Google websites yesterday appears to have been lifted. The blocking was likely reversed some time this morning. Due to the nature of DNS there is a delay before this trickles down to every ISP and every computer so if you still cannot access Google in China it’s likely just a question of time. You can also try to flush your DNS cache and it should work again.

Even though the blocking of Google Search may only have lasted for 12 hours or so, it was likely the single one decision by the Great Firewall authorities affecting the most users ever.

Was it a mistake?

The blocking of the worlds number one (and Chinas number two) search engine took place on a Friday night. It’s possible that someone simply pressed the wrong button and accidentally DNS poisoned the wrong website. Perhaps they only meant to block mail.google.com. If it was a mistake, that would explain why it was seemingly reversed this morning. In that case, at least one employee of the Golden Shield Project must have lost their job today.

Great Fire immediately offers reasons why this probably didn’t happen, but I’m amused by the suggestion that someone in an office “accidentally” caused thousands of businesses to hemorrhage money, locked millions of users out of their email accounts, and — worst of all — forced us all to use Bing. I can imagine the scene, which of course includes the obligatory, “We’re putting new coversheets on all the TPS reports… if you could go ahead and try to remember to do that.”

For more info, Samuel Wade of China Digital Times (which is unfortunately blocked in China) has compiled a list of stories on this subject. He links to this NY Times article — blocked in China as well — in which a Google spokesperson says, “We’ve checked and there’s nothing wrong on our end.” For a great further read, including some suggested workarounds (for the inevitable next time), here’s Great Fire again:

You can also access Google directly using one of their IP addresses. These don’t appear to be blocked (yet). Here are some:

2 Responses to “Google Blocked, Then Unblocked, In China. What’s Going On?”