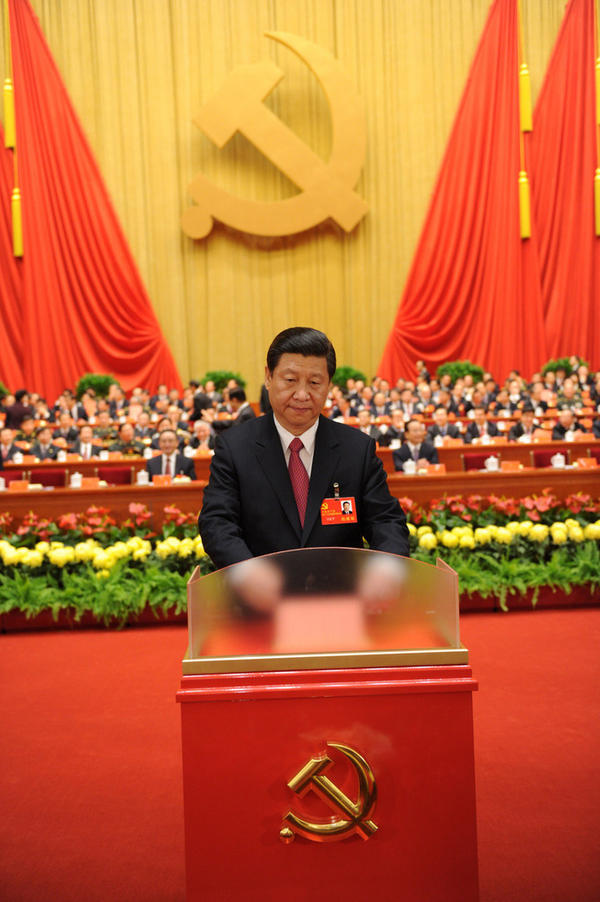 Via Xinhua, of course

One more day. One more day and the 18th Party Congress will be over, and we can celebrate our Internet speeds returning to normal. Bear with us through links.

It’s all winding down. “The 2,270 carefully vetted delegates cast their votes behind closed doors in Beijing’s cavernous Great Hall of the People for the new Central Committee, a ruling council with around 200 full members and 170 or so alternate members with no voting rights. // The committee will in turn, on Thursday, appoint a Politburo of a few dozen members and a Politburo Standing Committee, the innermost ring of power with possibly seven members, reduced from the current nine.” [Reuters]

All this nonsense will soon be over. “For a week, Beijing is flirting with memories of the pre-Internet age…. // For a week, the Party is warning people to be on the look out for subversive ideas—not conveyed by e-mail or satellite television or text message, but by ping-pong balls that can be hurled from taxi windows, or strapped to carrier pigeons and flown to who knows where. Those might sound like a retro threat, but not when you calibrate your mind, as the Party has, to the days of Kodachrome Communism.” [Evan Osnos, The New Yorker]

“Deng [Xiaoping] was China’s Steve Jobs and Hu [Jintao] is his Tim Cook.” “Mao may live on existentially, but the Chinese are more lost than ever on the path forward. Even Hu himself seems rather puzzled — spouting the line, ‘we will neither walk down the close, rigid old path, nor will we change banners and walk down a crooked path’ — that either left many mocking it or scratching their heads. Call it triangulation Chinese style, which recalls Deng Xiaoping’s formulation that the party can’t move too far left or too far right, and must find its own middle way. It seemed a spirited defense of Deng’s defining pragmatism that called for ‘crossing the river by grasping for stones,’ a reference that many Chinese Web users picked up. In short, Hu’s position is that he has no position.” [Damien Ma, The Atlantic]

“Hundreds of journalists now wandering Beijing in search of news.” “‘This is an absolute bloody disaster,’ says veteran Australian journalist Bill Higgins. ‘My editor is calling me up every day, asking how we can justify the expense of sending two senior reporters to China for ten days. I offered him a story about a provincial initiative to promote new dance routines for ethnic minorities in Sichuan. He told me to get off the phone.’ // Police report that across Beijing, hundreds of dispirited, disheveled and dejected reporters, from countries such as Australia, Canada, Germany, Japan and the US, are milling around the capital’s hutong and boulevards, many without a source or even a place to go and meet somebody for coffee.” [China Daily Show]

Stories popular on social media. “It is widely understood that the 18th National Party Congress of the Communist Party, except for the closing ceremony where the new lineup of Chinese leadership will take the stage, is nothing but carefully staged show with no substance. But some outright lies, shameless tributes and histrionic playacting may make you laugh and give you an idea how the country is controlled by well-fed party members and mouthpieces who cheer about the emperor’s new clothes, especially after you look at comments of Chinese net users who, like the kid in the crowd, don’t play along.” [Ministry of Tofu]

Knocking Weibo down a peg. “Taken alone, Weibo is inadequate as a tool for delivering social justice because the service is not an open forum for comment — the Chinese government maintains firm control over how wide this window of free discussion is allowed to open. When debate grows too ferocious, authorities have the power to choke it off, banning keyword terms and strategically disabling functions to tamp down discussion. Just this week, according to the Hong Kong University based China Media Project posts merely speculating on who would fill the seats in the Politburo Standing Committee, the Chinese leadership’s inner circle, were deleted. // As a result the service finds itself in a position similar to that of the country’s legal system. In theory, Weibo is a platform for citizens to give feedback and raise complaints, but ultimately the Party has the final say on whether anyone can open their mouth or not. When authorities do on occasion respond to pressure online, they do so unilaterally after the fact; web users never gain the satisfying sense they have engaged in a true dialogue with their government, or have enjoyed the benefit of due process.” [Tea Leaf Nation / The Atlantic]

Another case of a Western historian showing up a Chinese one on the subject of China. “As a historian, however, I cannot let pass unchallenged the characterization of premodern Chinese political culture as ‘meritocratic.’ // Zhang Weiwei, a political scientist and best-selling author, suggested in these pages that ‘the Communist Party of China may arguably be one of the world’s most meritocratic institutions’ (‘Meritocracy versus democracy,’ Nov. 10)… // …Over the last 20 years, research has shown that the keju was far from the ‘ladder of success’ it was long widely reputed to be. We know that in the Ming dynasty (1368-1644), for instance, merchants’ sons were not allowed to take the examinations at all, and that in the Qing (1644-1911), as Benjamin Elman, a scholar from Princeton University, has decisively shown, ‘the content of the civil service competition clearly excluded over 90 percent of China’s people from even the first step on the ladder to success.’” [Mark Elliott, NY Times]

So you gotta have talent to work here even if you’re white? Huh. “Two years later, Mr. Sliwinski says he is tired of teaching English, but is having trouble securing other work. That is how he found himself among the 1,200 expatriates searching through about 60 booths at the Job Fair for Foreigners, which was held in Beijing at the end of October. The fair also has annual events in Shanghai and Guangzhou. // To his disappointment, most of the companies represented were looking for English teachers. // ‘There are probably some jobs that are really good,’ Mr. Sliwinski said. ‘But there is huge competition among foreigners, and it is not like they will give you a job just because you are white.’” [NY Times]

Story of cyber-bullying. “If planning a wedding weren’t stressful enough, one Hong Kong bride-to-be now has to worry about the possibility of 1,000 angry gate-crashers. // The crowd has risen up in response to her widely republished Facebook posting earlier this month: ‘I’m not opening a charity….If you really only want to give me a HK$500 [US$65] cash gift, then don’t bother coming to my wedding.’” [WSJ]

Robots are stealing our jobs! “According to the Frankfurt-based International Federation of Robotics, China could become the world’s biggest consumer of industrial robots by 2014, with demand reaching 32,000 units. Gudrun Litzenberger, the organisation’s general secretary, has described China as the fastest-growing robot market in the world. // China has many reasons to embrace industrial robotics. Robots can improve energy efficiency and perform operations that would prove impossibly complex for even the best-trained humans. But the most important reasons are shifting demographics and basic economics: China’s working-age population is shrinking, sending labour costs spiralling upwards.” [The Guardian]

Sidney Rittenberg likes Xi Jinping, because of course he does. “Incoming Chinese president Xi Jinping has a ‘democratic style’ that will allow him to lay the groundwork for much-needed political and economic reforms, one of only a handful of Americans to join the Chinese Communist Party said on Monday.” [Reuters]

Could be worthwhile. “The Pulitzer Center is looking for photos of tobacco advertising in Chinese schools as part of a special series on cancer in the developing world, produced in collaboration with the BBC World Service programThe World. Your photo may be featured on the Pulitzer Center or The World’s website. // Please send images to pulitzercenter@gmail.com.” [Pulitzer Center]

Women remain the No. 1 reason most men do anything. [SCMP]

“Finalists of the International Yacht Model Competition,” via Shanghaiist: 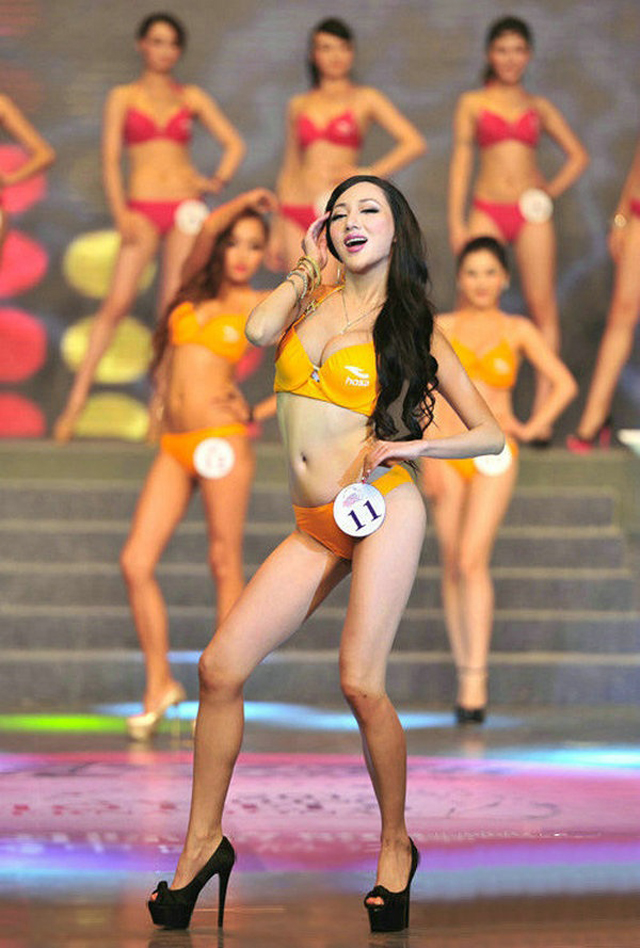 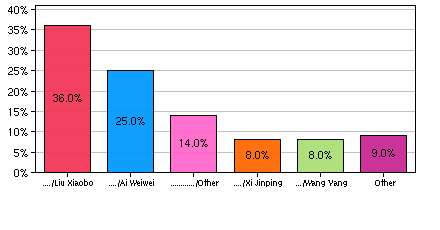 The Globe and Mail’s poll, “Who should lead China?“