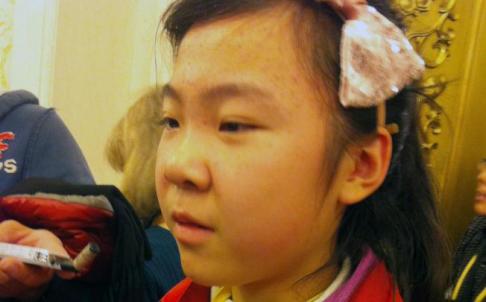 Knowing that kids say the damnedest things, CPC organizers probably should have thought twice before letting a preteen saunter into their conference room and drop a bombshell of a question. At an 18th Party Congress event, 11-year-old reporter Sun Luyuan, representing Chinese Teenagers News, posed this to a group of high-level ministers:

“I love snacks, but I don’t dare to eat snacks now and neither do my classmates, as there are so many poisoned foods on the market. So my question to all the minister-level uncles and aunties is: how can we children eat foods without concern?”

That’s how journalism should be done: asking the tough questions that are pertinent to the everyday people who never get the chance to confront public officials. Sun got every reporter’s dream response, too. According to South China Morning Post, a palpable hush came over the room as officials “suddenly straightened in their seats.”

The only way this anecdote could be better is if the next kid began his or question, “I have a friend who’s living in Tibet…”

But Ma Kai, the meeting’s host and secretary general of the State Council, just smiled.

He assigned the question to Education Minister Yuan Guiren . Yuan gave a stock answer, noting that food safety was a global concern and that problems occur sometimes.

“We have prepared a series of oversight systems to guarantee food safety,” he said.

Sun said she was happy with the answer. “I believe the ministers will find a solution, and yes, I’m optimistic,” she said.

We hope she never loses that optimism. Then again, I don’t know any journalist who’s a happy-go-lucky, take-life-as-it-comes kind of person, so… Indestructible force meets immovable object.