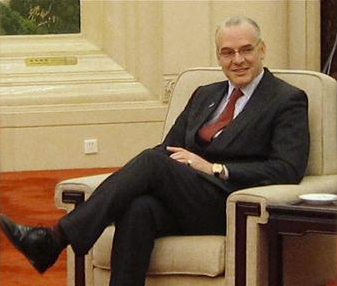 Neil Heywood was likely feeding information to British intelligence officers while in the inner circle of Bo Xilai, according to Jeremy Page of the Wall Street Journal.

From the very beginning of this saga, we’ve known that Heywood — poisoned by Gu Kailai, as the consensus goes — has been connected to MI6, Britain’s Secret Intelligence Service, but never have we had proof. Certainly nothing like this:

The Journal investigation, based on interviews with current and former British officials and close friends of the murdered Briton, found that a person Mr. Heywood met in 2009 later acknowledged being an MI6 officer to him. Mr. Heywood subsequently met that person regularly in China and continued to provide information on Mr. Bo’s private affairs.

William Hague, the British foreign secretary who oversees MI6, broke with standard policy of not commenting on intelligence matters and issued a statement in April saying Mr. Heywood, who was 41 when he died, was “not an employee of the British government in any capacity.”

That was technically true, according to people familiar with the matter. They said Mr. Heywood wasn’t an MI6 officer, wasn’t paid and was “never in receipt of tasking”—meaning he never was given a specific mission to carry out or asked to seek a particular piece of information.

But he was a willful and knowing informant, and his MI6 contact once described him as “useful” to a former colleague. “A little goes a long way,” the former colleague recalls the contact saying in relation to intelligence reports based on Mr. Heywood’s information.

If true, the most pressing questions become: 1) How did Heywood clear security checks and gain the trust of one of the dozen or so highest-ranking people in China? Security breach, yes? 2) Was Heywood murdered because he was doing spy work? Could he have possessed unimaginably damning information against the Bo’s?

Britain’s top newspapers have jumped on this story. They don’t add much to WSJ’s report, but here’s the Telegraph, Guardian and BBC. Surely these good folks will be eschewing US presidential election coverage to find out more about the murdered Briton who reportedly drove around in a silver Jaguar with “007″ license plates. We can only hope.

One Response to “Neil Heywood May Have Had British Spy Ties After All, Says WSJ”