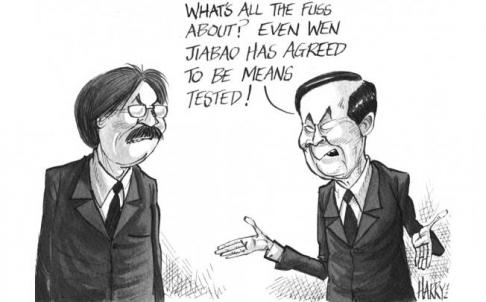 In a letter submitted to the Politburo Standing Committee, the party’s top decision-making body of which the premier is also a member, Wen asked for a formal inquiry into claims made by The New York Times.

A report on October 26 alleged his family had amassed at least US$2.7 billion of assets during his premiership. The Standing Committee had agreed to his request, the sources said.

It is unclear what the inquiry is likely to dig up, or when the results will be published, if at all.

Here are a few things more likely to happen than a conviction of Wen Jiabao, ordered by Wen Jiabao:

China Daily Show, get to work.

Meanwhile, it’s not too late to participate in our New York Times office pool – when will the website be blocked until? The nearest chosen date was November 10, while Kaiser Kuo has the backend at April 1, 2013.