Surveys and polls are notoriously unreliable in this country, which you might have heard is really intersecting/overlapping parts of four different and very disparate countries — urban China, rural China, rich China, and poor China. Sometimes what’s more interesting than poll results is poll methodology, and to that end, we’d like to find out which areas of the country were asked whether they believe the world is ending today, because apparently 1 in 5 people think the answer is yes.

A poll conducted by Ipsos on behalf of Reuters asked respondents whether they agree with this statement: “The Mayan calendar, which some say ‘ends’ in 2012, marks the end of the world.” Of the 16,262 adults in 21 countries, 10 percent thought yes. In China, that number is 20 percent.

Two in ten (20%) of those in China are in agreement with the statement, followed at the top of the global list by 13% in each of: Turkey, Russia, Mexico, South Korea and Japan. Only 4% in Germany and Indonesia seem to believe the prophecy, joined by 7% in Great Britain, South Africa and Italy.

Perhaps the fault is with the wording. Maybe Chinese respondents thought they were taking a true/false test: The Mayan calendar indeed does say the world ends in 2012. I’m no pro, but perhaps a better question would have been, “Do you believe the world will end in 2012, as predicted by the Mayan calendar?”?

Interestingly, only 12 percent of Chinese respondents said they “have been experiencing anxiety or fear because the world is going to end in 2012.” So: 20 percent says world will end, but out of that 20 percent, nearly half don’t give a fuck. 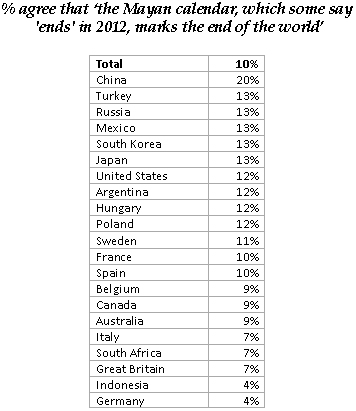 UPDATE, 11:30 am: Discovery News tells us people always go around saying “yes” when confronted with questions of doomsday, and adds:

Although this is an interesting poll, don’t go reading too much into it. It doesn’t represent the downfall of critical thinking or a crisis in society, it just represents the psychology of doomsday fears and the rich tapestry of modern culture. When you have an ancient calendar, superstition and innumerable options as to how the Universe may destroy our planet on a whim, there will be some people that buy into the fear.

Gottfried also said that people with lower education or household income levels, as well as those under 35 years old, were more likely to believe in an apocalypse during their lifetime or in 2012, or have anxiety over the prospect.

“Perhaps those who are older have lived long enough to not be as concerned with what happens to their future,” she explained.

(H/T Behind the Wall, MSNBC)