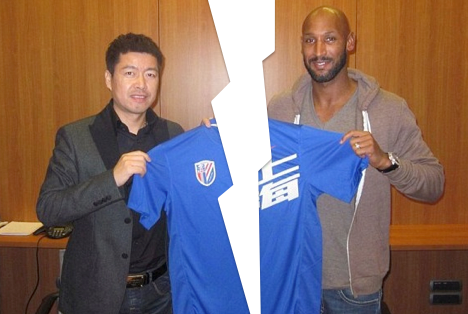 Shanghai’s Nicolas Anelka experiment is fast coming to an end. Multiple outlets have reported that FC Shenhua is in talks to negotiate a contract cancellation for the French striker, who seems destined to wind up with the English Premier League’s Queens Park Rangers. AFP reports via Sina that “Anelka has agreed to forgo the final year of his contract, worth $7 million, as long as Shanghai allow him to leave on a free transfer.”

“The discussion is between the club and himself, I don’t know about the specific details,” Shanghai Shenhua spokesman Ma Yue said. “But so far we haven’t got the final result.”

Daily Mail speculates that if Shenhua grants him his release, other top clubs may be interested in his services as well:

The talks to cancel his contract have encouraged QPR and West Ham but have also alerted other Premier League suitors who were initially wary that Shanghai would demand a fee for Anelka in January.

Anelka — “Le Sulk” — made 22 appearances with Shanghai this past season, his first in China. His Chinese Super League debut — in the “National Derby” at Beijing’s Workers Stadium — was met with much fanfare, though as I pointed out at the time, despite netting a goal, his impact on the game was minimal (a 3-2 Shanghai loss). The team seemed to find its stride with the addition of Didier Drogba, but Shenhua still finished 9th in the 16-team league, with Anelka finding the back of the net only three times.

The 33-year-old has said the season was the biggest challenge of his career, as he tried to stop the rot eating away at the team and mould an inexperienced group of players into a side capable of winning the increasingly competitive Chinese Super League.

His team of choice, QPR, is currently second-to-last in the Premier League with a -15 goal differential after 17 matches.