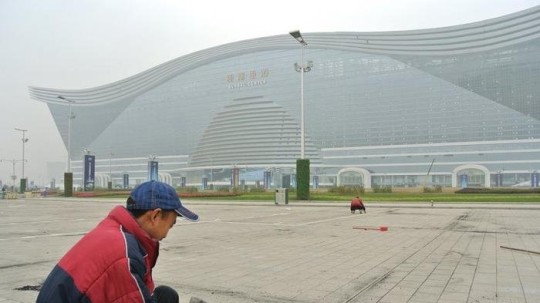 The 100-metre-high “New Century Global Centre” is a symbol of the spread of China’s boom, 500 metres long and 400 metres wide, with 1.7 million square metres of floor space, big enough to hold 20 Sydney Opera Houses according to local authorities.

By comparison the Pentagon in Washington — still one of the world’s largest office buildings — is barely a third of the size with a mere 600,000 square metres of floor space.

About 400,000 square metres will be devoted to shopping, most of the outlets high-end luxury brands.

Despite Chengdu being around 1,000 kilometres from the sea the complex has a marine theme, with fountains, a huge water park and an artificial beach, accented by the undulating roof, meant to resemble a wave.

“This is an ocean city built by man,” said guide Liu Xun. “There will be 1,000 rooms (in the hotel) and all will have seaside views.”

China is realizing the dream of Martin Dressler, the title character of Steven Millhauser’s Pulitzer Prize-winning novel. Notably, the subtitle of that book — set in early 20th century New York — is The Tale of an American Dreamer.

Alas, it’s from China these days that we’re seeing quotes such as, “This is an ocean city built by man.”