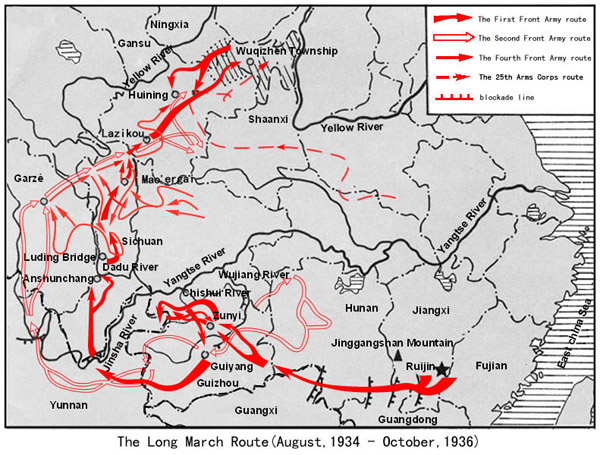 Global Times reports that “some 40 experts proposed over the weekend that foreign experts and leaders be invited to retrace the historic Long March, in an effort to promote the 12,500-kilometer-long route’s listing as a UNESCO World Heritage Site.”

But… foreigners have already done this. And look at the fruit they bear:

Ed Jocelyn and Andrew McEwen retraced the route in 384 days, was initially extolled by state media, then derided when they published a book that accused Mao Zedong of severely overestimating the length of the march and propagandizing it beyond recognition. Granted, they had no evidence to base their revisionism, but I must ask: are they invited?

Or maybe pseudo-foreigners like Sun Shuyun, whose The Long March hit even harder:

The myth was born, and it remains the enduring emblem of China today. For us the Long March is a story on a par with Moses leading the exodus out of Egypt. We can hardly escape it. It is enshrined for the nation in the musical extravaganzas The East Is Red and Ode to the Long March, and feature films of battles fought during the March are cinema classics. They take the idealism, optimism, and heroism of the Long Marchers and imprint them on our minds. The myth grows ever brighter…

And who can forget Frederic Tuten’s cult classic The Adventures of Mao on the Long March, reviewed by John Updike, featuring this section which begins on page 72:

Night. Mao is alone in his tent, his aides have gone to sleep hours before, Mao is not certain whether he is asleep or awake, the strain of the Tatu campaign has made everything seem strange. Mao hears the grinding rumble of a heavy tank and rushes from the tent. A tank, covered with peonies and laurel, advances toward him. Mao thinks the tank will crush him,, but it presently clanks to a halt. The turret rises, hesitantly. Greta Garbo, dressed in red sealskin boots, red railway¬man’s cap, and red satin coveralls, emerges. She speaks: “Mao, I have been bad in Mos¬cow and wicked in Paris, I have been loved in every capital, but I have never met a MAN whom I could love. That man is you Mao, Mao mine.”

Mao considers this dialectically. The woman is clearly mad. Yet she is beautiful and the tank seems to work. How did she get through the sentries? Didn’t the noise of the clanking tank treads wake the entire camp? Where is everyone?

Mao realizes the camp is empty. He is alone with Garbo. But Mao has always been more attracted to Harlow than to Garbo. What should he do not to break her romantic little heart?

“Madame, I have work to do,” says Mao gently.

“It can wait till tomorrow, my love,” she answers, unzipping her coveralls.

Mao thinks: “After all, I have worked hard and do deserve a rest.” But an internal voice answers him: “Rest only after socialism.”

“My Mao, this is no way to treat a woman who has made a long journey to be with you.”

“Ah, that is an old bourgeois ploy, Mao mine.”

Garbo hangs her cap on the mouth of the tank’s .375 recoilless cannon. And that night Mao instructed Garbo in the Chinese Way, the Five Paths, and the Three Encirclements.

Note: in all likelihood, Tuten never retraced the Long March, but one wonders what kind of book he might have produced if he did.

We say: bravo to those 40 experts who have invited foreigners on this amazing journey through the pages of history itself. We eagerly await the new, scholarly, provocative, intelligent, critical, didactic, dramatic tales to emerge out of this campaign.

Yang Xiannong, a professor from the academy, argued that letting foreigners walk the route is the best way to make them know how hard the Communist Party and its leadership worked to survive and develop.

Yeah yeah, that too.

8 Responses to “Chinese Experts Ask Foreigners To Retrace The Long March, But, Um, Foreigners Already Have?”