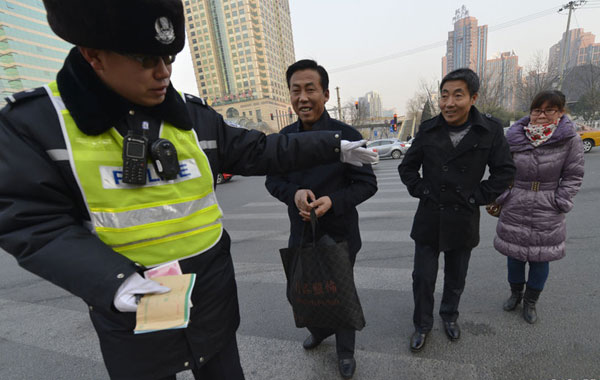 Someone actually got a fine for jaywalking in Beijing recently. Nineteen someones, in fact. Via Sohu (which has more hilarious photos): “On the morning of December 11, 2012, at Huizhong Road in Chaoyang District, traffic cops rectified Chinese-style street-crossing, 19 pedestrians who ran a red light respectively ‘ate’ a 10-yuan fine.”

But will the fine deter any jaywalkers in the future? Unlikely. Global Times bringing the voice of reason:

But traffic wardens may be fighting a losing battle. The warden complained that people are always running across the street, and inching forward when cars still have the right of way.

“I always try to stop them, but few of them will listen,” she said.

Also, we’re informed that the 10-yuan fine was introduced in 2004. Just so you know: jaywalking has been illegal in Beijing since 2004.

Over 80 jaywalkers dodged the traffic to cross the very busy road at Dawang Bridge, Chaoyang district, in five minutes from 13:21 pm to 13:25 pm against the red light, regardless of traffic wardens’ attempts to halt them.

Another traffic warden at the crossroad, who did not give his name, said he has been informed that their position will be raised to that of an auxiliary police officer, and they will be issued with new uniforms to emphasize their greater powers of enforcement.

“I believe this will help us do our work, and maybe more people will listen to us,” he said.

However, the traffic warden said he would not fine jaywalkers even if he were able to catch them.

“Everybody has his own difficulties and I believe the jaywalkers must have convincing reasons. The only thing I hope they can realize is they are putting their lives at risk rather than adding troubles to us,” he said.

So you would never delight at one of them getting hit by a car, right?

“A jaywalker got hit by a car yesterday [Tuesday] just one block away from my crossing,” he said.

People don’t jaywalk to get across the road. Oh no. They do it to escape the psychopathic wrath of the traffic wardens.

5 Responses to “Jaywalking In Beijing (a.k.a. “Chinese-Style Street-Crossing”) Is Now Technically Not Allowed”