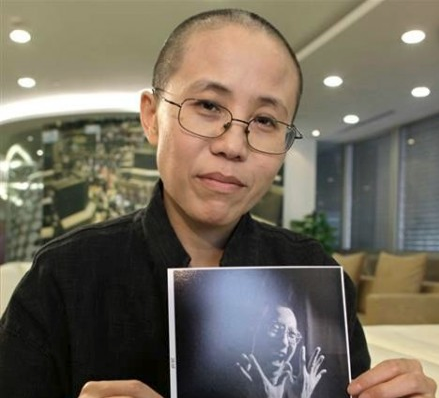 Liu Xia has been under house arrest ever since her husband, Liu Xiaobo, won the Nobel Peace Prize two years ago. Her location isn’t exactly a secret though, so AP reporters staked out outside her house, then walked in while the guards were out to lunch.

In her first public interview in 26 months, Liu said, “We live in such an absurd place. It is so absurd. I felt I was a person emotionally prepared to respond to the consequences of Liu Xiaobo winning the prize. But after he won the prize, I really never imagined that after he won, I would not be able to leave my home. This is too absurd. I think Kafka could not have written anything more absurd and unbelievable than this.”

Give the piece a read. It comes on the heels of China officially saying it will not be releasing Liu Xiaobo, due to all those crimes he committed: embarrassing China, basically.

One more excerpt from the AP story:

Once a month, she is taken to see her husband in prison. It wasn’t clear when Liu Xia started regular visits with her husband or if they would continue following her interview. She was denied visits for more than a year after she saw him two days after his Nobel win and emerged to tell the world that he had dedicated the award to those who died in the 1989 Tiananmen crackdown.

…The authoritarian government’s detention of the Liu couple, one in a prison 280 miles (450 kilometers) northeast of Beijing and the other in a fifth-floor apartment in the capital, underscores its determination to keep the 57-year-old peace laureate from becoming an inspiration to other Chinese, either by himself or through her.Her treatment has been called by rights groups the most severe retaliation by a government given to a Nobel winner’s family.

By the way, while their situation in no way compares to Liu’s (not even close), we’d like to point out that the guards in charge of watching over Liu have it pretty tough, too.

Around midday, the guards who keep a 24-hour watch on the main entrance of Liu’s building had left their station — a cot with blankets where they sit and sleep.