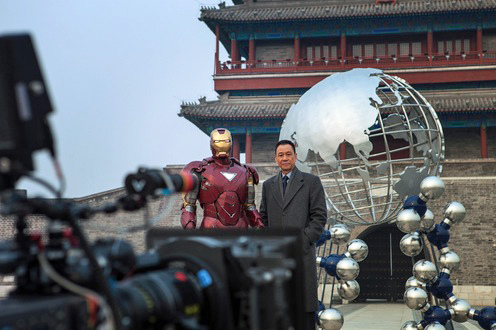 Hollywood Reporter calls the image a “photo leak” — though it’s as likely to have been planted by a publicist — and explains:

It is not clear whether Robert Downey Jr is in that armor – the Chinese blogosphere have been abuzz with speculation about his presence on set ever since filming in Beijing began on Dec. 10. An accompanying caption attached to the photograph explains how Wang’s character was “explaining about Beijing life” to “Iron Man who have just descended to Yongdingmen”.

The Chinese actor is Wang Xueqi, who plays Dr. Wu, a part that was originally Andy Lau’s. We’ll remind you here that Iron Man 3 is being co-produced in China because Walt Disney and Marvel signed a cooperation agreement with Beijing-based DMG Entertainment, and it’s a fine move if for no other reason than because China loves Iron Man — perhaps no one more than this guy.

The movie is scheduled for release on May 3, 2013. Here’s the trailer, if you haven’t already seen it… featuring the Mandarin!