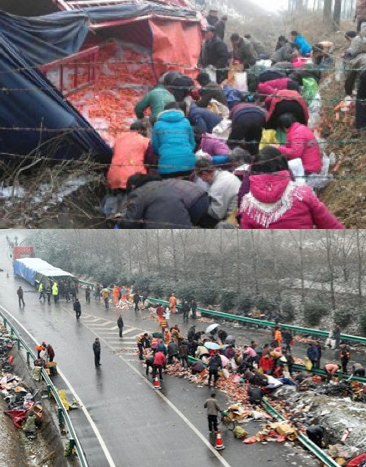 If you spill it, they will come. We’ve seen it before: a vehicle carrying a perishable good overturns; people flock from all corners to bag the fresh groceries.

This happened twice in the last few days. The first time, on Thursday, an apple truck in Shaanxi province tipped over, attracting about 60 people. The very next day, in Guigang, Guangxi province, a truck spilled 38,000-yuan’s worth of carrots. Both happened on what appears to be relatively secluded parts of highways, but news of free supplies always travels fast and draws a crowd.

Shanghaiist has details from both incidents. Here’s how the driver of the carrot truck reacted:

The driver of the truck called up the police to say “there’s too many of them, there’s only me and my strength is too small, I can’t stop them”. By midday, he had received backup from his boss who said, “I don’t know where all these people came from to loot my carrots. one after another they came, a hundred or so of them…when I saw them taking my carrots it was unbearable, I’m really sad.”

One after another they came… a hundred or so of them. We’ll shelve the zombie analogies for another time. As I mentioned back in September when we saw video of people swarming around 770 pounds of spilled eggs, “If you’re the kind who feels the need to scoop eggs off the street to take home and cook, you deserve your spoils.” These villagers probably deserve theirs as well — it’s only very unfortunate that it had to come at the cost of the supplies’ owners.

And yeah, please don’t tell Daily Mail about this.