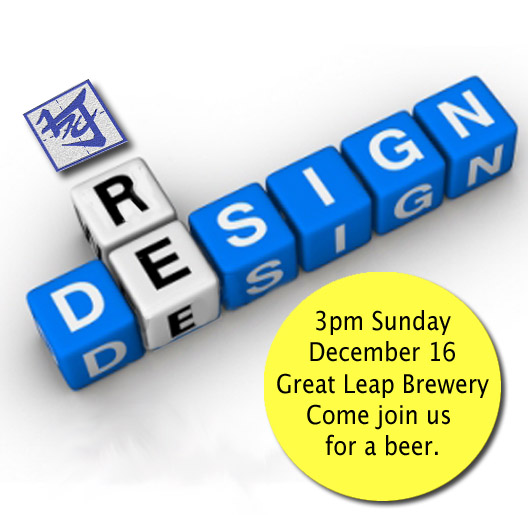 The whole gang will be at Great Leap Brewing starting around 3 pm today. Apologies in advance if we miss any big Sunday news.

Carl Setzer, joint owner, took some time to answer our questions, notably why he would open his reputable establishment to ruffians like ourselves.

Don’t go so hard on the guy — his Cleveland upbringing has brought him enough grief.

Why are you from Cleveland?

When Kyrie Irving is playing for the Dallas Mavericks in 2015, will your soul collapse unto itself like a black hole?

Most definitely. Took me a year to get over LeBron’s departure. When Kyrie leaves and the corpse of Dion Waiters is considered Cleveland’s only hope then you’ll see me talking to the PSB about immigrating to China and doing TV interviews with Dominic Johnson-Hill on CCTV-1 during Chinese New Year.

What is your favorite non-Great Leap beer?

I like the fuck you-ness of Three Floyds Brewing Company. Their Gumball Head IPA is amazing and their Dark Lord day limited release beer is the best example of hating your customers as you can get. People forget that breweries are supposed to be run by socially inept assholes, but as long as the beer is good it shouldn’t matter. It’s when a brewing company is run by some slick douche with a marketing degree that you have be careful. I also like Victory Brewing out of PA and Stone Brewing out of San Diego.

NBC’s Rock Center did a story about you not too long ago. Be honest: have you watched it?

No. My friends and family all watched it and said I didn’t fuck it up. But I actually don’t look at a lot of our press because the natural inclination is to read the comment sections and you can only take some cunty fuck nugget telling you that you are tantamount to a Nazi sympathizer so many times. I did get some pretty awesome hate mail though. It’s amazing how many people don’t know the difference between the atrocities of the Great Leap Forward and the atrocities of the Cultural Revolution… A for effort anyway.

It’s part of my charm.

Last time I was at Great Leap, I really enjoyed the Almond Macchiato Agressor With God’s Blood. Why did you take it off the menu?

Heh. The Aggressor will be back on tap next week. When people like your beer they drink it all and you have to make more.

And the Dionysus Banana Hazelnut Muffin Crumb Ale, with hints of chai basil?

That one sold well with your mother.

But my favorite Great Leap beer is still the Red Nebula Dragon Fang Wheat, probably the best wheat beer this side of Kansas.

Why did you decide to let us hold our redesign gathering at your establishment?

I’ve really enjoyed reading Beijing Cream this past year. Alicia’s essays are way better than your masturbatory reposting of whatever you find online, but I’d say it’s all worth a read on a daily basis. I also like any chance to reenact St. Paddy’s day 2011.

Advice: stow away your drapes.

In honor of Tao’s “achievement” we are “offering” another “free” keg of beer on top of the one that BJC has provided for those that choose to turn out. As the douchiest bar in Beijing we like to provide as much warm, overpriced beer for free as possible.

8 Responses to “Sage Words From Carl Setzer, Owner Of The Place We’ll Be Hanging Out Today”