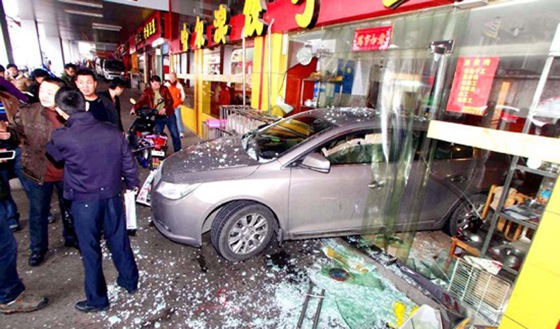 Meanwhile, in Liuzhou, on the heels of China’s first national day for road safety, via Liuzhou Laowai

First links edition in December! And on it goes.

How the “Jiang Zemin is dead” rumors began. “Two years ago, on June 4 — the anniversary of the 1989 Tiananmen Square Massacre and the most sensitive date in the Chinese political calendar — Ji Pomin received a text message from a high-placed friend: It said that former president Jiang Zemin had been taken to a military hospital in a critical condition. Ji fired off a coded message to hundreds of people in his address book to seek confirmation, asking: ‘The Supreme Old Master ascended to heaven?’ Many of Ji’s politically connected friends forwarded the text to their friends, who misinterpreted the cryptic question as a statement. By June 6, overseas Chinese websites were reporting that former president Jiang Zemin was dead. // In established democracies, a false rumor about the health of an ageing Ronald Reagan or a Margaret Thatcher would be promptly debunked and have little bearing on the workings of government. In China’s powerful but brittle dictatorship, built on almost invisible lines of patronage, the false reports of Jiang’s death immediately became a major matter of national security.” [John Garnaut, Foreign Policy]

A story about discrimination, with reactions that are… mixed. “This type of discrimination against AIDS patients may be common in China. but there is a twist to this story. The young man went to a third hospital in Tianjin, only this time he changed his own medical records to avoid a blood test, and concealed the fact that he has AIDS. He received the operation to treat his lung tumor in mid-November and is now reportedly recovering at home. // When this story circulated on Weibo, China’s version of Twitter, it sparked intense debate. The tweet from Li Hu, an HIV carrier in Tianjin, that broke the story has attracted more than 6,100 retweets and 4,800 comments on Weibo. While some microbloggers demonstrated sympathy, using ‘in his shoes’ arguments, a surprisingly large number were angry about the young man’s concealment and concerned that his actions put others in danger.” [The Atlantic]

The Internet: ruining officials’ plans to marry mistresses since 2012. “The disciplinary body of east China’s Shandong Province is investigating an agriculture official after his hand-written promise to his mistress that he will divorce his wife was posted online. // Shan Zengde, vice head of the Agricultural Department of Shandong provincial government, is under disciplinary investigation by the Shandong Provincial Commission for Discipline Inspection of the Communist Party of China, it has been confirmed.” [Xinhua]

It’s for smart children like this that an education would be well-served. “Ten-year-old Feng Shaoyi has been hounded by the media after his recent online post about his intention to quit school went viral on Sina Weibo, China’s answer to Twitter. It has attracted more than 7,000 comments and was forwarded more than 18,000 times. // While many children his age aspire to become scientists like Einstein, Feng argues that people with such ‘lofty ideals’ are destructive to the planet. For example, Einstein’s theory of relativity led to the atomic bomb. // ‘My dream is to live with the girl I love. It doesn’t matter if I have to cut firewood and pick up rags for a living,’ Feng writes.” [China Daily]

Su Wei is having a meltdown, thanks to you fans. “There are many lasting effects and memories from the Beijing Ducks’ run to their first ever Chinese Basketball Association championship last season. Yet in the carryover from 2012 to the quickly approaching 2013, it has been three words that have perhaps had the biggest impact in current Chinese fan culture: // ‘Huan Su Wei.’ Substitute Su Wei. // It’s also had an impact on Su Wei himself, who is apparently so upset by being constantly serenaded by fans that he is now seeking the help of a psychologist.” [NiuBBall]

Suspicious, some? “Car plate hunters in Beijing are joking that they may have to change their name to ‘Liu Xuemei’ to be a winner in the city’s plate lottery after the name won in seven consecutive months, the Beijing News reported yesterday. // A record 1.26 million Beijing dwellers competed for fewer than 20,000 car tags through a lottery system this month. The lottery is used to relieve traffic congestion.” [Sina]

And other strange coverage of World AIDS Day. “While most newspapers focused on informative education and prevention activities related to HIV/AIDS, Dongguan Times went straight for the proverbial low blow by focusing its front page story entirely on brave and nervous nurses at a local hospital while they treat AIDS patients who seem crazy and plague-ridden (and who are mostly outsiders [外地人] anyway).” [Danwei]

PSY says he gets sick of Gangnam Style sometimes. [AFP] 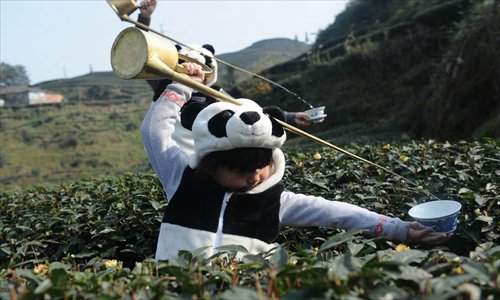 Via Global Times: “A father and daughter use traditional long-spout pots to pour tea at a tea farm in Ya’an, Sichuan Province Sunday. The tea bushes are fertilized by panda excrement, and their leaves are priced at around 219,865 yuan ($35,310) per 500 grams.”

2 Responses to “Top-of-the-Week Links: Ai Weiwei delivers message for Foreign Policy, about those Jiang Zemin death rumors, and even PSY is sick of Gangnam Style”