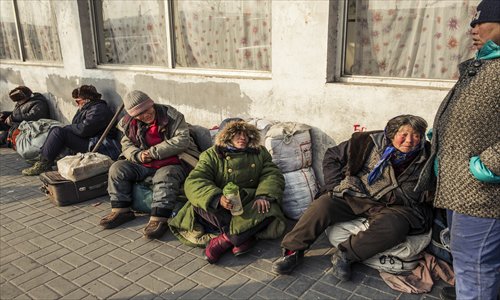 Chengguan are like referees: the less you hear about them, the better. If this is our standard, they’ve made progress, since we haven’t heard much from them for a while. But all good streaks come to an end, so here we go, via Global Times:

Dong Yi’an, a 78-year-old petitioner from Dandong, Northeast China’s Liaoning Province, came to Beijing in 2004 to protest the “illegal” demolition of his house. He told the Global Times that more than 40 people came on Saturday night, among whom more than half were wearing police uniforms and three or four were in the uniform of chengguan (urban management officers’), while the others were young men in ordinary clothes.

“Those people did not say too much. They came and then started ripping our clothes from us. My coat, my hat and my bedroll were all taken away, but they were not satisfied, as then they opened our luggage and took all the clothes away,” said Dong.

According to Dong, police and chengguan did not participate in the looting. “They stood there and ordered the youngsters to take our clothes, as though they were supervising what was going on,” said Dong.

That’s the worst. If you’re going to steal from the down-and-out, at least have the courtesy to get your hands dirty and do it yourself, like this chengguan in Harbin who has no qualms about beating up a homeless man.

Wait, no… this is the worst:

These winter supplies were provided by a charity program Street Aid At Hand two weeks ago to help them survive the winter.

Authorities deny all accusations, as I hope they would:

“Our staff have never participated in such actions, nor did we ever hear of such things,” said the officer.

But, you know, urban management authorities have a long history of doing shitty things, so if evidence in this case does actually exonerate them, it may actually be the first time that’s happened. #CynicismHat