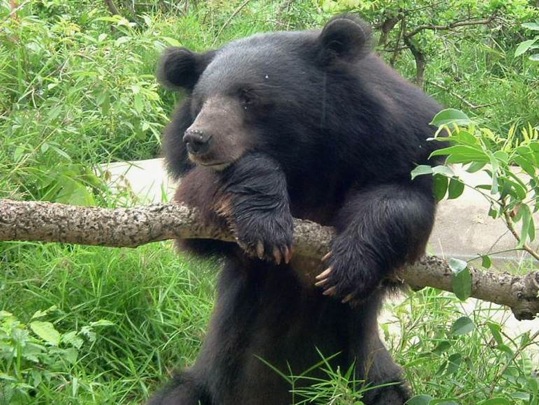 When I think of happy bears, I think of Baloo from The Jungle Book or George Wendt and Chris Farley. I absolutely do  not think of Asiatic black bears that have been imprisoned since birth in order to extract bile from their gall bladders.

But I guess Fang Shuting, head of the Chinese Association of Traditional Chinese Medicine (TCM), has a different way of looking at the practice. “The process of extracting bear bile is like turning on a tap: natural, easy and without pain,” he says, as quoted in IHT Rendezvous. “After they’re done, the bears can even play happily outside. I don’t think there’s anything out of the ordinary! It might even be a very comfortable process!”

Happy. Today, at least six bears do finally have a reason to be happy, as they have been rescued from an illegal bile farm in Sichuan province by the good folks at Animal Asia. The traumatized bears will be provided medical care and allowed to recover from a lifetime of caged living that often restricted them from even turning around.

The animals, commonly known as moon bears, are prized by practitioners of TCM for their bile, which is thought to be efficacious in reducing fevers, protecting the liver, improving eyesight, breaking down gallstones, and acting as an anti-inflammatory. Detractors claim that not only is the farming inhumane, but unnecessary as well, as there are numerous herbal and synthetic alternatives in Chinese medicine that are just as effective.

Animals Asia is devoted to shutting down bear farms and bringing an end to the bile trade. They have more than 250 rescued bears at their sanctuaries in China and Vietnam, where the animals are allowed to live out their natural lives free from abuse. You can follow them on Twitter here.

According to the Rendezvous article: “While the Chinese government is taking action against some bear farms, it’s not illegal here if farms have licenses for it. About 10,000 bears are believed to be caged for their bile in China and a couple thousand in Vietnam.”

Much like public perception of shark fin soup and dog meat, more people may be turning away from bear bile, too. One Sina Weibo user, according to Rendezvous, wrote, “I don’t believe it at all that extracting bile is as easy and comfortable as Fang said. Why doesn’t he extract the bile from his body in the same way to prove it?” We can only hope more people share that sentiment.

Rescuing China’s Bears From Bile Farms, One by One (International Herald Times)