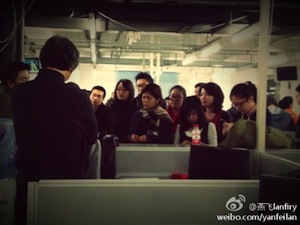 Two big Southern Weekly updates this morning. First, it appears the ripples have spread to Beijing News, a sibling publication to Southern Weekly under the ownership of Nanfang Media Group, where the top publisher has resigned instead of publishing a pro-government editorial. Shanghaiist reports:

Now, reporters at the Beijing News have revealed that Dai Zigeng (戴自更), the Communist Party official who served as the paper’s publisher, resigned late last night after propaganda authorities forced the paper to run the Global Times’ editorial in today’s edition. Other papers that also resisted the instruction to run the editorial report being pressured to do so today.

Some Beijing News reporters’ Sina Weibo accounts have apparently been shut down:

It was two days ago that the Central Propaganda Department ordered every major newspaper to republish Global Times’s editorial that stated, among other things, that Tuo Zhen was not involved in any editorial hijacking and that government oversight is a way of life for Chinese media. Beijing News’s resistance this time can only be interpreted as a principled stand in solidarity with their colleagues to the south.

Speaking of them: that incident appears to be winding down, as SCMP reports that a provincial party chief in Guangdong has successfully negotiated a return to work for Southern Weekly’s journalists:

A source close to the newspaper’s editorial staff said that Hu Chunhua, a rising political star who took up his new position as the province’s party secretary only last month, personally stepped into the talks between reporters and the management.

The stand-off would not escalate while the negotiations were continuing, the source said.

Another two sources, also close to the newspaper’s editorial staff, said reporters decided to return to work after meetings with management yesterday.

It appears to be a direct contradiction to what we heard late yesterday afternoon. SCMP again:

It said under Hu’s deal newspaper workers would end their strike and return to work, the paper would print as normal this week and most staff would not face punishment.

According to an earlier Reuters article — before this apparent eleventh-hour agreement — some sources in Nanfang Media Group said the paper may be published Thursday, possibly with replacement editors. We’ll find out soon.