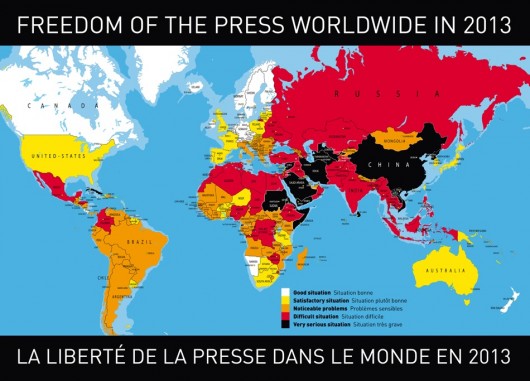 Do journalists in China really face a tougher environment than Vietnam, Cuba, Sudan, Yemen, Laos? According to the French non-profit Reporters Without Borders (RSF), yes.

China (173rd, +1) shows no sign of improving. Its prisons still hold many journalists and netizens, while increasingly unpopular Internet censorship continues to be a major obstacle to access to information.

In its downloadable report, RSF writes that China, North Korea, Vietnam and Laos “still refuse to grant their citizens the freedom to be informed.” That seems just slightly disingenuous. To link Chinese with North Korean media demonstrates a blindly politicized unwillingness to understand a government’s actual role in news-making and censorship, but then again, no one ever accused RSF of being apolitical. If the organization has any clout, by all means it should spend it toward China’s cause. Fuck censorship and all, and yeah, even one person jailed for a politically sensitive remark is one person too many.

The US ranks 32nd on the list, which marks a 15-spot improvement, actually. A bunch of European countries in which nothing ever happens tops the rankings.

2 Responses to “China Rises One Spot In Latest Reporters Without Borders Press Freedom Index, Ranks 173 Out Of 179”