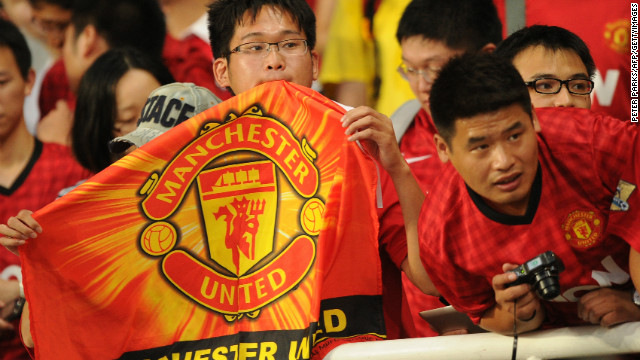 Manchester United recently announced sponsorship deals with two Chinese companies, Wahaha and China Construction Bank (CCB), the latter of which will produce Man U-branded credit cards. Considering China is one of the largest growth markets for any business, it’s no a surprise that the 134-year-old club is looking to strengthen its presence here. There are reportedly 108 million Man U fans in China — nearly double the size of England’s population — and surely plenty more to be gained in such a football-crazed nation.

Although I question how loyal these fans are, given that many tend to be of the bandwagon variety, switching club loyalty based on their favorite player (my guess is Van Persie, currently leading the EPL in goals scored, tops many lists) or the reigning champion (that would be Manchester City), the more fans a club can boast, the more revenue they can generate from ticket and apparel sales. Manchester United has always recognized the importance of the Asia market, in particular China, which explains why the team was in Shanghai last summer. Signing these sponsorship deals is the next logical marketing move to boost brand visibility, and it’s clear that Wahaha and CCB are strategic choices.

Man U already has its own credit cards in Asian countries like Indonesia, Malaysia and Singapore. It’s not surprising that they would leverage their experience and success in this area, especially since domestic consumption, income and urbanization rate are all expected to grow in China. Analysts think credit card purchases will increase as Chinese consumers make larger, more expensive purchases. It might annoy the rest of us to wait behind someone using a credit card, but that seems to be the trend for the cool consumers. Cooler still? A red, white, and black card bearing the Red Devils’ crest.

Meanwhile, increasing numbers of Chinese are traveling abroad and using China-issued credit cards. During the London Olympics the Chinese were one of the largest group of spenders, leading many more stores to accept Unionpay.

There’s also this: the day Man U signs a good Chinese player (Dong Fangzhuo was on the squad from 2004-08, but notched just one appearance). In 2006 I visited Old Trafford – OK, here I admit I am a bit of a Manchester United fan – in the middle of a stormy weekday. I saw groups of Korean tourists crowding in the team store to buy the jerseys of Park Ji-Sung, who joined Man U in 2005. Imagine if the Red Devils sign a Chinese player with as much class as Park or his Asian replacement, Shinji Kagawa. Jersey sales would skyrocket. And all the purchases could be made with a Manchester United, China-issued credit card!

Wahaha, meanwhile, is a strategic local partner, especially for the rural areas. As the largest Chinese beverage company, it has a strong network spanning the country, and is particularly visible in bottom-tier cities. If you buy a bottled water, there’s a 25% chance that it’s Wahaha. Plus, its owner is the richest man in China – maybe one day he’ll buy the club? His reception can’t be worse than the Glazer family’s.

Finally, it’s been said that rural China is the new frontier for the development of youth football. If you build it, they will come — as this story about a basketball court in an ethnic Miao village shows. In rural China, if you build a brand, consumers will come — in this case, to the allure of Old Trafford and Manchester United.