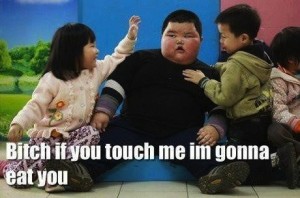 China’s multi-decade quest for rapid development has by all measures been a stunning success. However, this has not come without a few unintended consequences.

The physical conditioning – or lack thereof – of 90s-generation youth has been called a “crisis.” Sun Yunxiao, author and deputy director of the China Youth and Research Center in Beijing, told AP, “Our economic power has grown while our people’s physiques have not only failed to improve, but have deteriorated. That’s unacceptable. This is something that worries the nation.”

Last year, two college students died during university-mandated fitness runs, leading other schools to scale back or cancel athletics events during annual meets. And the education ministry reports that male university students run the 1,000-meter race 14 to 15 seconds slower than their peers from a decade earlier. Women ran their 800-meter race 12 seconds slower. The results of other tests show similar declines. Not surprisingly, one area of growth has been in body weight – student obesity rates are climbing.

Clearly the pressure cooker that is the Chinese education system just does not leave much room for physical fitness.

Lou Linjun, a former physical education teacher in Hangzhou in eastern China, said the grueling schoolwork has driven students out of the exercise yards. “It’s become a norm that schoolyards are empty in the afternoon at many of the city’s key high schools,” said Lou, who is now an assistant principal.

“Students are less likely to be willing to endure hardship and do not like to run anymore.”

But it is not only educators who are taking notice. Some are calling this trend – especially among the boys – a threat to China’s future. Check out what Major General Luo Yuan said in Global Times (quoted by AP again):

“Femininity is on the rise, and masculinity is on the decline,” Yuan thundered. “With such a lack of character and determination and such physical weakness, how can they shoulder the heavy responsibility?”

Perhaps the army is right to worry. Sun Yunxiao’s research has found that not only are young Chinese boys between the ages of 7 and 17 getting physically weaker, they are also 2.54 centimeters shorter than their Japanese counterparts.

This has all produced some interesting paradoxes for modern China: a nation forged on a history of collective sacrifice and the often superhuman physical exertions of its people now has reason to fear it is producing youngsters who can’t pull their weight.

Which brings us to another paradox: how is China winning all those gold medals? AP again:

“We have this strange phenomenon. Outside, we are showing off muscles, but at home we are panting,” popular blogger Li Chengpeng wrote last summer, when China’s Olympic athletes in London raked in 38 gold medals — second only to the United States.

“Outside, the red flags are flying. At home, the red lights are going up,” Li wrote.

A topic for another time, perhaps.