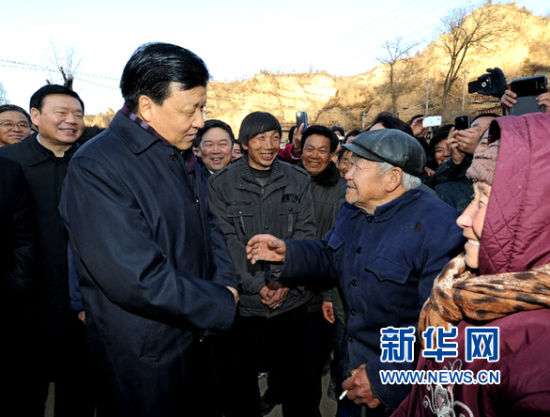 Liu Yunshan, who was introduced to this blog not long ago in relation to Xi Jinping’s displeasure with his handling of the Southern Weekly incident, recently completed a tour of Shaanxi province, and as the chief of China’s Central Propaganda Department, he made sure to bring along some of his propagandizing friends.

Here’s the lead of Xinhua’s write-up, as posted on CRI:

After knocking on three doors at a building in an affordable housing community and getting no response, a senior Chinese leader found himself outside during the coldest month of the year in northwest China’s Shaanxi Province.

Door after door, it happens like this, Liu Yunshan’s knocks met with silence. He thinks: out here, I am cold, unloved, unrecognized. He turns to his traveling secretary to ask for his gloves, but to his great shock and dismay, his companion is no longer the upright, unctuous young man always holding a leather-bound logbook, but a small, crooked, and — by all objective assessments — dirty monkey. “What has become of you?” Liu asks. His inquiry is returned with successive loud, simian whoops. Liu turns to his left, expecting to see the county delegate, who has transformed into a pig. Its snout wet with mud, it glances up with two dark marbles that are expressionless and exasperating. Liu is about to speak, he wants to, but a sound catches in the back of his head. He can feel it there, that tiny spark of language like a rubber ball. No, not like a rubber ball. Like a spark. But he has already said that. Like a ball? For a reason he can’t explain, Liu Yunshan looks at his hands, which are now paws, and when his eyes refocus on the distant, straight horizon, shaped by the dry austerity of this Shaanxi farm, he sees a muzzle, mottled-brown, and suddenly hears the frantic, distraught, and meaningless blast of three sharp barks.