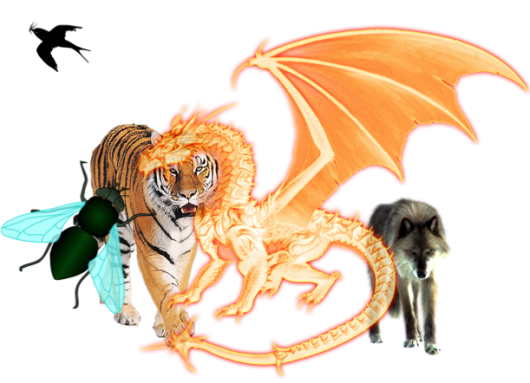 If politics and diplomacy get too confusing, just throw around some animal metaphors. As the Sydney Morning Herald reports, Senior Colonel Liu Mingfu (soon to be Private Liu or General Liu, depending on which way the wind blows and how much cash and guanxi he has) has stated that both a rabid tiger and wolf are currently nipping at the heels of the dragon. He adds that as all Chinese people are peace-loving wolf-haters, nuking wolves is justifiable.

Senior Colonel Liu Mingfu, of China’s National Defence University, blamed US ”orchestration” and Japan’s ”militarism” for rising tensions over disputed islands known as the Senkaku in Japan and the Diaoyu in China.

”America is the global tiger and Japan is Asia’s wolf and both are now madly biting China,” Colonel Liu said. ”Of all the animals, Chinese people hate the wolf the most.”

…”If this Japanese wolf again attacks America’s Pearl Harbour or Australia’s Darwin, how do you know it wouldn’t receive another nuclear bomb?” Colonel Liu said. ”The world would hail if Japan receives such a blow.”

The hawk states that in its guise as Little Red Riding Hood the dragon would protect the little lamb unless it becomes a jackal by siding with the wolf and the tiger:

He said Australia should play the role of a ”kind-hearted lamb” and China would discourage it from being led astray.

”Australia should never play the jackal for the tiger or dance with the wolf,” he said.

Meanwhile in the Guardian, Xi Jinping has started the ball rolling against tigers and flies:

“We must uphold the fighting of tigers and flies at the same time…,” rhetoric continues.

Unfortunately, the tigers in this case aren’t running dogs but the spawn of the dragon.

2 Responses to “Confused By All Those Animal Metaphors Lately? Here’s A Handy Glossary”