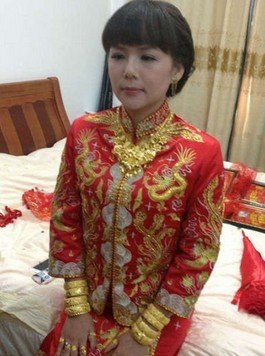 A wealthy businessman in Fujian province is being praised for bestowing more than 1 billion yuan — $160 million — as dowry for his daughter’s marriage. Wu Duanbiao, head of the ceramics firm Fujian Wanli Group, also donated 15 million yuan to two local charities. Via SCMP:

Pictures of the wedding were posted on the internet on Sunday, showing a dowry that included four boxes of gold jewellery, a bankbook with deposits worth 20 million yuan and Wanli stock worth 5 million yuan.

On the list were also numerous property assets including a retail store in Quanzhou, and real estate such as the Olympic villas and the Wanda mansion.

Media has reported there’d be an eight-day public banquet, but a company representative denied it, saying Wu would “keep things simple.”

We hope the the groom’s worth it. SCMP again:

The bridegroom, surnamed Xu, is a resident of Quanzhou prefecture, in Fujian, and a civil servant. The newly wed couple had known each other since childhood and were classmates from kindergarten to secondary school, according to the report.

Many weibo users praised Wu for donating to charities on the occassion. Others admired him for his love for his daughter.

Let us be the one to raise the question: are we sure he’s not paying to get rid of her? 1 million is generous. 10 million is love. 100 million is “have a happy life and let’s stay in touch, maybe.” 1 billion seems like a big GTFO to me.

By the way, Cecil Chao Sze-tsung, you taking notes? If you still want to marry off your daughter, you’ll need to double your offer of HK$500 million.