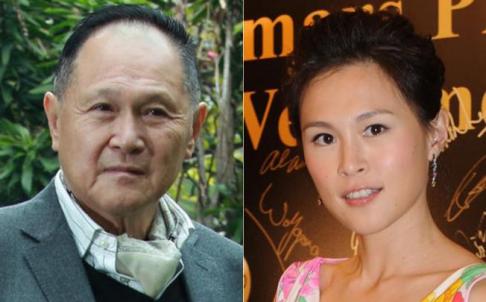 Hong Kong property developer Cecil Chao Sze-tsung, looking very much like a tycoon in the above picture, has offered HK$500 million for the man who marries his daughter, Gigi Chao. Emphasis: man.

For you see, there is one slight problem, as reported by South China Morning Post:

Rejecting suggestions Gigi, 33, is a lesbian and describing news of her union as “false reports by newspapers”, the 76-year-old owner of Cheuk Nang (Holdings) said the offer was “an inducement to attract someone who has the talent but not the capital to start his own business”.

Gigi was quoted last week as saying that she married Sean Eav, her female partner of seven years, in France on April 4. Same-sex marriage is not legally recognised in Hong Kong, although France has civil unions.

Gee, who wouldn’t want this guy as a father-in-law. Sounds like a totally reasonable dude.

(Chao is also somewhat of a poster boy for safe sex. According to SCMP, he claims to have had 10,000 girlfriends — but only three children!)

Gigi is the eldest of her father’s three children. We get a slight glimpse of who she is through a guest-column she penned in 2007 for Knows Hong Kong, in which she writes:

As a daughter of a successful actress and a well-known businessman, I was confused about what to do with my life. In fact, many of my friends with parents who have achieved a lot face the same dilemma.

Some choose to embrace it, get spoiled and be the prima donna. Some rebel against it and just run away. These are the two most common reactions for children like us.

Disobedience is the way to progress. Call me a rebel but I like trying out different things at my own risk. That’s how people grow.

About her father, specifically:

My father took a hands-off approach in parenting. I see him as a friend more than a father.

Exorcise your own demons or they will possess you.

My father is not a player. A player fools around – my father knows exactly what he wants.

I still believe in romance. I will have my own family and a dog for sure.

Knowing that lessons are only obvious in retrospect, my mom chose to beat me up instead of reasoning with me. But I still think sometimes she just took it out on me.

The column is really just a jumble of shoddily organized thoughts — bylined Jan Leung, so maybe it was ghostwritten — but in retrospect, it almost all makes sense. I do wonder, however –

It is seldom the external environment that stirs up strong emotions – it is usually one’s inner demons or inner weaknesses that cause turmoil.

– whether her “friend” father offering a bounty for her hand in marriage stirs up any “strong emotions.” The rebel in her probably says yes.

Speaking in a light-hearted tone, Chao told the Post: “He [her father] has an interesting interpretation of me.”

…Asked if her father was cross about her alleged same-sex marriage because of his pronounced heterosexuality – having reputedly had 10,000 girlfriends – Gigi replied: “He loves the attention.”

As to whether she has indeed been “wed”, the 33-year-old said she would neither confirm nor deny the rumours. The same goes for her sexual orientation: “I’m not afraid to admit anything. But I do want to respect my parents,” she said.