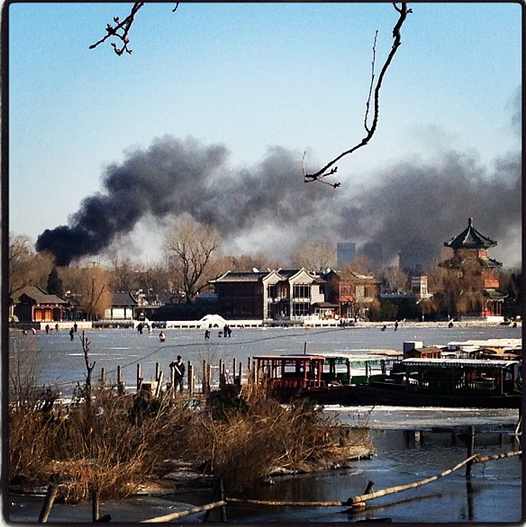 Via Elyse Ribbons – Houhai on fire

Bold. “Yanhuang Chunqiu, a political journal associated with more liberal, pro-reform elements within the Chinese Communist Party, has published a bold and important ‘New Year Greeting’ in its latest edition. The article, called ‘The Constitution is a Consensus for Political Reform,’ argues that China’s Constitution already lays out the priorities to be addressed in carrying out meaningful political reform.” (China Media Project)

Eep. “By 2020, sociologists expect an “extra” 35 million Chinese men — males for whom there are simply no available female partners. That’s slightly more than the population of Canada.” (Kathleen McLaughlin, Global Post)

Flogging is no good. “A principal from a Huangchuan county primary school in Xinyang, China’s southeastern Henan province, was sacked last week after two teachers from its nursery section took turns flogging a four-year-old boy. // The boy had been “beaten mercilessly” on the buttocks with a metre-long wooden stick on December 28 after he had forgotten to bring an activity book to school, the Henan-based Dahe Newswebsite reported on Tuesday.” (SCMP)

Copycat architecture. “To see a design come to fruition is surely an architect’s greatest thrill — but to see it reproduced twice must be mindboggling, especially if one of the constructions is entirely unsanctioned. This is the plight currently faced by world-renowned architect Zaha Hadid. One of her designs is being realized twice in China: as planned at a construction site in the Chinese capital of Beijing, and — completely off Hadid’s accounts — at another location in Chongqing, where copycat architects are trying to complete the very same building in a ‘massive, open counterfeiting operation,’ and in less time than the official one.” (Time)

Uighur writer’s death in prison. “The reported death of a celebrated Uighur writer in a Chinese prison, if confirmed, would be an indictment on freedom of expression, and expose harsh prison conditions in China, Amnesty International said today. // Although author Nurmemet Yasin’s death was reported only a few days ago, he apparently died sometime in 2011 in Shaya prison in western China’s Xinjiang Uighur Autonomous Region.” (Amnesty International)

I don’t think I’ve personally used this phrase, but… “A catchphrase meaning ‘positive energy’ has been named the most popular phrase of 2012 on the mainland, reflecting growing public demands for sweeping change amid disenchantment with corruption, pollution and widening wealth and social divides.” (SCMP)

Explosion cover-up. “A subsidiary of the China Railway Tunnel Group purposefully concealed a fatal railway tunnel explosion that occurred on Dec. 25 in north China’s Shanxi Province, the State Council’s Work Safety Committee said Thursday. // Eight people were killed and five were injured in the explosion, which occurred on a section of railway tunnel that was under construction, the committee said in a statement.” (Sina)

Oops. “A woman had to remain in the same position for nine stops after train doors shut on her hair while she rode subway line 2 in Wuhan, Hubei Province, on Tuesday.” (Global Times)

Wuhan millionaire cleans streets. “Yu Youzhen, 53, owns 17 flats worth more than 10 million yuan (HK$12m) as a result of state land acquisitions that began in 2008, the Wuhan Evening News reported. // But instead of basking in her wealth, she insists on getting up at daybreak, six days a week, to get to her job as a sanitation worker for the Wuchang District Urban Management Bureau, in Wuhan, of central China’s Hubei province.” (SCMP)

Gilbert Arenas headed back to the US for groin injury treatment. (NiuBBall)