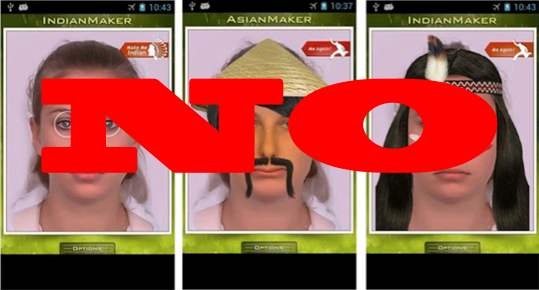 In November, Angry Asian Man noticed a very peculiar Android app that was being sold in Google Play: “Make Me Asian.” The program works by superimposing straw hats and fu manchus on user-uploaded pictures, which, um… yeah, don’t do that.

Oh hells no. At the risk of giving this damn thing more attention than it deserves, behold this ridiculously racist Android app… which allows users to make themselves “a Chinese, Japanese, Korean or any other Asians!” No, seriously. This is a real app.

In late-December, pastor Peter Chin from Washington DC posted a petition on Change.org calling for Google to remove both “Make Me Asian” and “Make Me Indian” from Play. (Google does not monitor the third-party apps in its online store.) “This is not what it means to be Asian or Native American – these are nothing less than hateful and offensive stereotypes that are used to this very day to marginalize and humiliate people,” Chin wrote. “They are not funny, and their use highlights a vicious double standard in the treatment of certain minority groups.”

It’s taken nearly a month, but Google has finally capitulated: the apps are gone. As Chin updates:

I’m deeply thankful to the nearly 10,000 who who signed this Change.org petition to take down these apps. I am also grateful for Google, who heard our outrage and pulled the apps. This may seem like a small victory, but it made an important statement: that minorities will not simply accept dated and offensive stereotypes that are wrongly foisted upon them. We stood up, our voices were heard, and something changed. I hope that our society will take notice and realize that previously voiceless communities will not remain silent any longer.

14 Responses to “Somehow, Someway, Google Came To The Conclusion That The “Make Me Asian” App Was A Bad Idea”