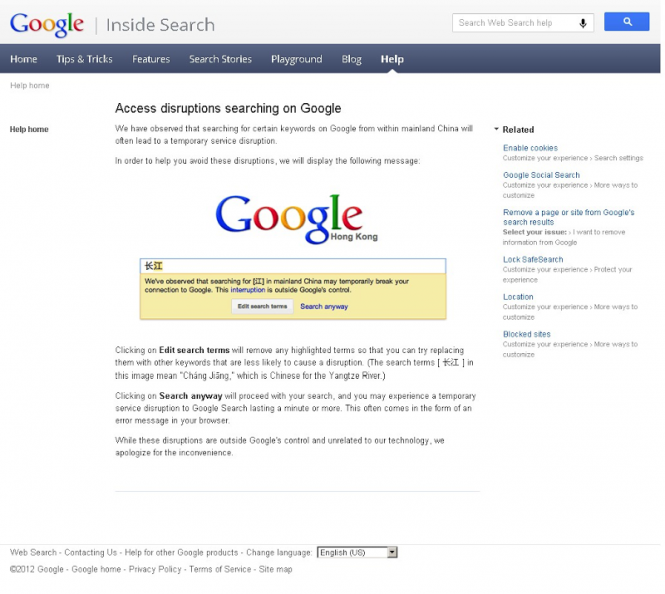 Google, the company, has quietly stopped its practice of displaying warning messages to Chinese users who search for sensitive terms on its service. “At the same time, they deleted the help article which explained how to use the feature,” writes GreatFire.org. “This indicates a new development in the relationship between the Chinese government and Google.”

According to the Guardian, “A Google spokesman confirmed it removed the notification features in December, but declined to comment further due to the sensitivity of the situation in China.”

Could Google be laying the path to reentering the mainland? This is a good thing, right?

You probably already know that many people don’t think so. GreatFire again:

Google has been depicted as a model company that stands up to the Chinese government and upholds its famous motto “Don’t be evil”. This impression reached a climax in May this year when Google introduced a new warning message aimed at users in China. Typing one of the many keywords blocked by the Great Firewall, this message would inform the user that continuing the search would probably break the user’s connection. It was a bold step towards exposing the censorship that the authorities desperately try to hide. At the time, Foreign Policy asked whether in this “second clash between the Internet search giant and the Chinese government, will freedom of speech win?”.

Can we pause here? I get the temptation to anoint allies and saviors in fights against the machine, but Google is and has always been a company, not John Stuart Mill. Many Chinese netizens believe — rightfully, in my opinion — that Google never should have left the mainland in 2010 if it sought to make an actual difference in its professed fight against Internet censorship. Instead, it took a moralistic stance that secured it the gushing praise of American technology writers but scorn and ridicule within China, not to mention a widespread belief that it was pulling out of the market simply because it couldn’t hack it — that crying “censorship” was just its way of saving face.

Google is a company. It’s a company that routinely practices censorship — please look at YouTube and its vague, randomly enforced “community guidelines” — and imposes lamentable policies such as real-name Google-Plus registration. It’s a company that has investors and therefore cares about profit. Can we please — before we get in a habit — drop this idea that it cares about Chinese freedom of speech for China’s sake? Off the top of my head, I can think of at least a few things it cares about more than your and my ability to hop over the Great Firewall, such as, oh, its image, its bottom line, its ability to function, its existence as a company.

Let’s drop the pretense. If it now seems, as GreatFire claims, that “Google’s reputation as a fighter of censorship may not be fully earned,” it’s because we were duped to believe it was a fighter of censorship in the first place. We don’t need it to be, you know. We just need it to be here — like a decent parent — functioning (i.e. not blocked), chipping away at nefarious restrictions instead of trying to topple the entire system, being good in the practical, useful sense.

6 Responses to “Google Stops Notifying Users In China Who Search Sensitive Terms, And This Is Supposed To Matter Because?”