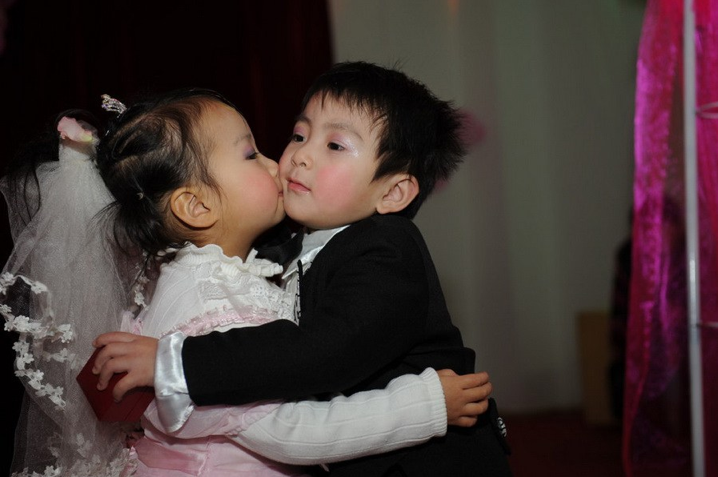 Until first grade do us part? Via NetEase

These links posts seem to be getting longer. Hmm.

Chinese poet gets 12 years. “A dissident Chinese poet whose detention has drawn an international appeal for his release was sentenced Monday by a court in southwestern China to 12 years in prison for contract fraud, his lawyer said. // Li Bifeng — formerly imprisoned for five years for involvement in the Tiananmen Square democracy movement — was sentenced at Shehong County Court in Sichuan province, said lawyer Zhao Jianwei. He said the defense would appeal.” (AP)

News. “Jack Ma, CEO of China’s leading e-commerce firm Alibaba announced Tuesday that he will resign later in May, triggering guesses over the successor of the firm’s spiritual leader. // Ma who was called by some as ‘China’s Steve Jobs,’ made the announcement on the group’s official Sina Weibo, in a letter to its staff that he would be step down from the position of CEO of Alibaba Group as of May, the annual celebration, when the new CEO will be authorized as well.” (Caijing)

Meanwhile, Pony Ma. “The makers of WeChat said recently that the messaging app will likely soon surpass 300 million registered users – and now that has officially happened. The massive milestone is confirmed by Tencent (HKG:0700) CEO Pony Ma himself, who hailed the huge growth in the Whatsapp-style app since its launch on January 21st, 2011.” (Tech in Asia)

Please, please Beijing, build an express track. “Hong Jianping, a 31-year-old employee from an export company in Guomao, who lives by Line 10′s Songjiazhuang station in Fengtai district, told the Global Times that he felt the experience of riding on Line 10 was akin to great suffering.” (Global Times)

Taxi standoff in Beijing. “During rush hour in Beijing, taxis can be found parked idle at the curb in the busiest parts of the city, as would-be passengers struggle to find a ride. As Beijing residents complain that it is becoming harder to hail a cab in the city, cabbies grumble that low fares, high monthly fees and gridlock make driving during rush hour a money-losing endeavor–and that it is hard to scrape by even when driving conditions are good” (Alexander Nasr, Tea Leaf Nation)

Well, the air is a little better. “A hundred chemical plants, construction sites and factories in Beijing have closed temporarily or cut back production as the authorities scramble for ways to curb the worst air pollution in years.” (SCMP)

However… “The Asian Development Bank and Tsinghua University recently released the ‘National Environmental Analysis’, which reported that among the world’s ten most air polluted cities, 7 are in China: Taiyuan, Beijing, Urumqi, Lanzhou, Chongqing, Jinan and Shijiazhuang. The report also points out that only 1% of China’s 500 cities have met the air quality standard recommended by the World Health Organisation.” (Shanghaiist)

Toxic spill, but no one finds out until five days later. “On December 31, 2012, the name of Zhuo Zhang River suffered a more deadly taint. Thirty-nine tons of aniline — a toxic derivative of benzene used in dyeing processes — sliced through a crack in pipeline in Changzhi, Shanxi, and quickly spewed downstream. Within days, both the river and a reservoir were contaminated. (According to official accounts, the reservoir was disused and absorbed 30 tons of the leaked aniline.) At a time when the flow of information was crucial, politics trumped life: The water supply to Handan, a major downstream city of more than one million residents, was not cut off until January 5, five days after the accident, when Changzhi officials notified the Shanxi provincial government for the first time.” (Tea Leaf Nation)

With pictures. “A group of over 50 migrant workers entered Beijing’s Qijiayuan Diplomatic Compound Monday, protesting against unpaid wages they claimed were owed by a construction company boss who lives inside the compound.” (Shanghaiist)

Li Na’s still in it though. “The first male competitor from mainland China at a major since 1959 put up a fight in his Australian Open first round match but ultimately failed to advance, as his compatriots in the women’s draw cruised to straightforward victories.” (WSJ)

Via Isidor Fugue’s post about foreign correspondents and masks:

Is the gas mask to journos in Beijing what body armor is to them in Middle East + Afpak? Looks good on TV. @limlouisa

This is Sanlitun (teaser 2) interlude:

Before and after: pollution in Beijing and Tianjin. (WSJ)

“The Future Leaders of China”: a useful chart. (The BJ Reviewer)