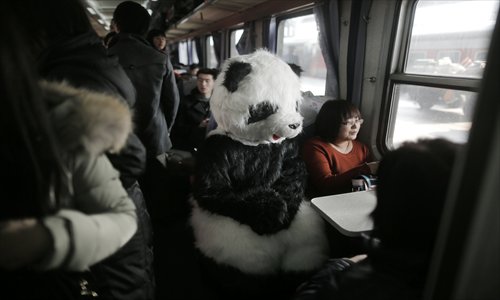 Caption via Global Times: “A woman wearing a panda suit sits on a train going from Beijing to Cangzhou, Hebei Province, on Saturday in hopes of feeling a more special atmosphere as huge masses of people rush home for the upcoming Spring Festival. Photo: CFP”

Xi Jinping behind closed doors. “Future historians wondering exactly when the PRC entered its pre-revolutionary phase may focus on a series of speeches that General Secretary Xi Jinping delivered behind closed doors to the Communist Party elite after being promoted to the top slot in the leadership. It was rumored early on that his tone was not encouraging to anyone hoping for an incremental transition to the rule of law with wider scope for civil society and greater accountability in government. Now Gao Yu has provided a few quotes from one of these speeches in an essay which Yaxue Cao has translated. In these fragments we glimpse a ruling class that not only is prepared to defend its privileges with force but anticipates the need to do so, and views proposals for reform as threats to its grip on power.” (AE Clark, Ragged Banner)

Chen Guangcheng has some unkind things to say about China. “Blind dissident Chen Guangcheng on Tuesday urged China’s people to end the communist-governed nation’s ‘leadership of thieves’ and for Washington not to ‘give an inch’ on human rights in its relations with Beijing. // Chen made the comments as he received an award from a human rights group in a ceremony attended by several U.S. lawmakers on Capitol Hill. His speech was a stinging rebuke to authorities in China where he had faced years of persecution for his legal activism against forced abortions and for citizens’ rights.” (AP)

“Oh My God, Shut Up About China’s Game Console Ban Being Lifted.” “Ever since the news broke that an anonymous source thinks China’s Ministry of Culture is considering lifting China’s decade-long ban on game consoles, the world has gone a little crazy. Somehow, a single, anonymous source about something that might happen has gotten people so excited that Sony and Nintendo both saw their stocks jump and Forbes is talking about how those companies could “make billions” if the ban is lifted. Talk about irrational exuberance.” (Charlie Custer, Tech in Asia)

Corollary: “‘We are reviewing the policy and have conducted some surveys and held discussions with other ministries on the possibility of opening up the game console market,’ a source from the Ministry of Culture, who asked not to be named, said. // ‘However, since the ban was issued by seven ministries more than a decade ago, we will need approval from all parties to lift it,’ the source said.” (China Daily)

Tibetans not happy about this. “In China, a recently screened TV drama, Tibet’s Secret (西藏秘密), caused outrage amongst many Tibetans, critical of the director, Liu Depin, for what they perceive as a distortion of Tibetan culture and religion. Since the drama was broadcast on the state-run China Central Television (CCTV), in early January 2013 via CCTV channel 8 in prime time 7:00pm, the controversy has intensified, and somewhat inevitably, begun to turn political in nature.” (Global Voices)

Would increase? “A commentary in The Beijing News on Tuesday urged the municipal government to ban or reduce the number of fireworks set off in the capital during next month’s Spring Festival if the current heavy smog does not disappear by then. // Beijing has been blanketed by smog four times this month. The discharge of fireworks would increase the city’s air pollution level to ‘hazardous,’ seriously threatening people’s health in cases where there is little or no wind to dispel the polluted air.” (CRI via Sina)

Mostly the cameras are to record traffic accidents so that we can post them on blogs. “China is becoming a surveillance state. In recent years, the government has installed more than 20 million cameras across a country where a decade ago there weren’t many. // Today, in Chinese cities, cameras are everywhere: on highways, in public parks, on balconies, in elevators, in taxis, even in the stands at sporting events.” (NPR)

Self-defense? “More than 400 lawyers and women’s rights activists have sent a petition letter to the Supreme People’s Court and the Supreme People’s Procuratorate calling for the reversal of a death sentence that was handed down to a Sichuan woman who killed her husband after suffering months of domestic violence.” (SCMP)

Sky is the Limit (by expats in Beijing) interlude:

“Time to Abandon the Post-Apocalyptic Unlivable Hellscape that is Beijing?” (John Wagner Givens, The Durian)

Oooh. This is how they're promoting Viagra in China. http://t.co/hB9uH9Zr