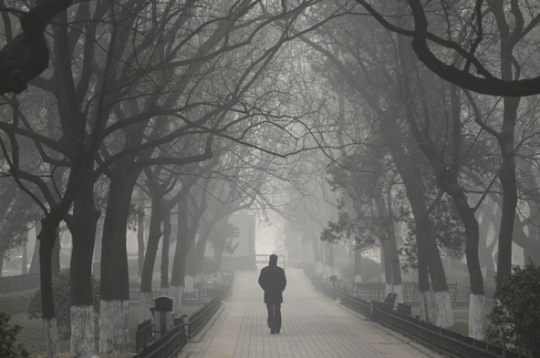 The heavy smog that’s defiled our skies is reportedly causing very real problems on the ground, too — anecdotally, at least, as Bloomberg reports:

You could fill a small library shelf with scientific studies that have linked air pollution to cardiovascular disease, so perhaps it shouldn’t be considered breaking news that five successive days of “hazardous” air might cause an uptick in medical emergencies. For more unsettling reading — if you live in China, here’s where you switch on your cognitive dissonance filter – here’s the New York Times’s Well blog:

The smallest particles of pollution, those finer than 2.5 microns in diameter — or about one-thirtieth the width of a human hair — are particularly effective at infiltrating the body, the researchers noted. There is some evidence that they can even penetrate the brain through the nasal passages, said Jennifer Weuve, the lead author of a third study, also published in The Archives of Internal Medicine, linking pollution to cognitive decline.

This probably won’t make you feel any better, but emergency plans have been enacted in Beijing. Bloomberg again:

Beijing yesterday started its emergency-response plan to the severe pollution, which included ordering government vehicles off the roads to cut usage by 30 percent, according to Xinhua, citing Yu Jianhua, director of the city environmental protection bureau’s air quality department.

The plan also calls for construction sites to limit activity that creates large amounts of dust and asks industrial companies to reduce emissions. Residents are advised to stay indoors and use public transport if they need to go out, while primary schools should reduce outdoor activities, Xinhua said.

Highways closed, flights delayed, social unrest stirred… however, there is some good news. The AQI has remained below 400 for each of the last five hours:

And we can see the literal (blue) light at the end of the tunnel, thanks to Xinhua:

The pollution is expected to engulf Beijing until Wednesday, when wind will arrive to blow the smog away, according to a weather report from the meteorological station.

Hang in there, everybody. We’re gonna make it.