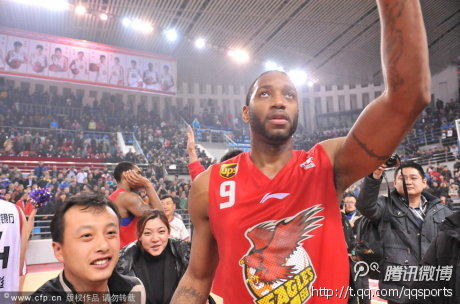 Tracy McGrady and the Qingdao Double Star Eagles have seemingly found a groove on the court, winning four straight, but as we’ve known all along, T-Mac’s season would be one that makes headlines on and off the court. Here’s another example of the latter, via Jon Pastuszek of NiuBBall:

Considering that the iconic McGrady’s every move has been and will continue to be the lead story this season, perhaps a feature interview. Or a one-on-one TV spot.

And all of that can be in order… if you cough up some dough first.

According to a Jilin newspaper, McGrady will sit down for non-mandatory media sessions only under the following conditions: An up front payment of $5,000 for a one-on-one interview and $1,000 for a group interview.

Which explains why nobody has gotten an exclusive interview in China with McGrady yet. And it also explains why you haven’t seen a lot of off-court pictures either because if you want one of those, you apparently have to pick up the fee for his hotel suite.

We imagine McGrady, like Stephon Marbury, is interested in selling his “brand” in China. Charging for interviews and getting suspended isn’t how to do it.