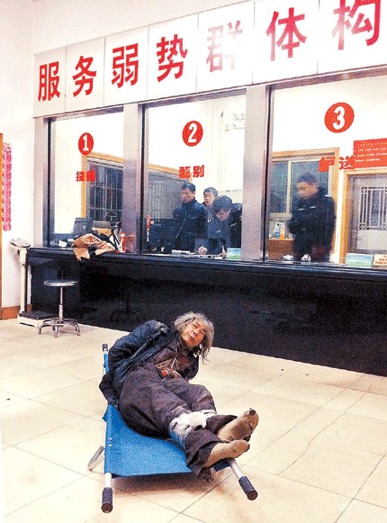 Dai Peng, a reporter with Changsha’s Sanxiang Metropolis Daily, pretended to be a homeless mute on Monday evening to expose physical abuse in the city’s homeless shelters. He sort of got exactly the story he was after.

Shanghai Daily reports that on Monday evening, Dai put on shabby clothes and waited at an intersection until residents called for help. The police eventually came and took him to the Changsha Shelter Center, where employees promised to take care of him. But once the cops left, the abuse began (remember, Dai was pretending to be mute):

They repeatedly asked the reporter what his name was and where he came from, and kicked him to the ground and beat him when they could not get an answer.

The reporter was not allowed to leave the shelter until he called his father, who negotiated with shelter staff, the newspaper said. The reporter was asked to sign a document saying he had “volunteered” to leave.

As Dai was leaving, he took the above picture of a homeless man with his arms and legs bound, alone in the middle of a reception area.

Changsha authorities said they’re looking into the case, but denied that Dai was beaten. Global Times:

Changsha Civil Affairs Bureau and police have been looking into the case, and bureau officials told the Global Times yesterday employees were following procedures when they were forced to have “physical contact” with Dai as they suspected he was carrying dangerous items in his pocket. Employees later found he was carrying a voice recorder and asked him to leave, the bureau said.

“Center employees and police asked for Dai’s name and physical condition but he remained silent. He grew agitated when asked whether he took drugs, and reached into his pocket. The employees were afraid he was carrying dangerous items. He refused to be frisked, fought back and fell during the conflict,” Wang Ying, a deputy director with the rescue center, told the Global Times.

Surveillance footage, however, appears to tell a different story.

According to surveillance video provided by the bureau, Dai can be seen being held on the ground for about five minutes.

About that video: it’s publicly available, as you can see below. Technology is a bitch, isn’t it?

If Dai Peng ever exhausts his stories in Hunan province, we have an idea for a next project: find out which chengguan are stealing from the homeless in Beijing.