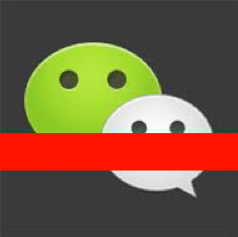 Some writers at Tech in Asia conducted a little experiment today with WeChat (Weixin), a Chinese texting app developed by Tencent, and found trying to type Southern Weekend in Chinese resulted in this Orwellian message:

Not easily defeated, they tried again.

We’ve tested it out going from users in China to Thailand (blocked), Thailand to China (blocked), and even Thailand to Singapore (blocked); the prohibited words are not sent at all. The name of the magazine can be sent in English.

Thoughts on why it’s not blocked in English?

In related matters, China Digital Times has a full rundown of search terms blocked on Sina Weibo thanks to Southern Weekend:

Nonetheless, South China Morning Post assures us that celebrities are finding their way to voice their opinions via social media:

[Former Google China chief Li Kaifu], a Taiwanese-born American, said on his microblog: “From now on, I will only talk about east, west and north, as well as Monday through to Friday” – omitting references to the south or the weekend. The newspaper’s Chinese name is literally translated as “Southern Weekend”.

Personally, I think “restricted words” sounds like a great title for a high school poem, or a linguistics dissertation.

UPDATE, 1/12, 2:09 pm: Tencent called the case a “glitch,” but Tech in Asia replies, “But there’s clear evidence (see the screenshot collage above) of very specific ‘sensitive’ phrases being blocked by the app – particularly the Chinese name of the outspoken magazine Southern Weekend.”