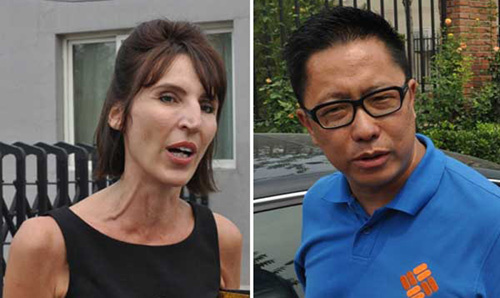 American Kim Lee came into the Chinese spotlight in 2011 when she dared to speak out against domestic violence. She posted pictures of injuries suffered at the hands of her abusive husband, Crazy English founder Li Yang. And then she publicly hassled him about signing their divorce papers.

Well, yesterday morning, Kim won about as definitively as she could have hoped. Reports Global Times:

The court also ordered a restraining order against Li, 43, the first time a Beijing court has given such an order.

None other than the New York Times’s Rendezvous blog has commented on the significance of this case:

“It’s a very important case. All of society was paying attention,” Guo Jianmei, a leading rights lawyer, said in a phone interview. “We’ve been waiting for this for a long time.”

“Firstly, the court granted a protection order. Secondly, it acknowledged domestic violence as the grounds of divorce,” something still too rare, she said.

“Thirdly, it ordered Li Yang to pay 50,000 renminbi in compensation for the violence, which although it’s a small amount is important in saying ‘it’s not acceptable,’” she said.

The defeat, however, may be that Lee is actually getting less than she deserves:

Yet Ms. Guo said that the financial terms of the settlement – Ms. Lee will receive 12 million renminbi ($1.9 million) and a fixed sum annually until her daughters reach 18 – showed that Chinese courts failed to uncover Mr. Li’s true assets and make him pay commensurately.

Still, 12 million will go a long way. And there may be another victory yet, not just for the 41-year-old Lee, but for Chinese women everywhere:

By last Friday, two days before the divorce, she had received 1,141 such messages from strangers, she said.

“It quickly became a matter of the other women and their stories,” she said. “No one else was speaking out. I just felt I had to.”

“I hope people will use me as an example of success,” she said. “Now I can say, ‘use your rights, these are the laws and it’s painful and they could be better but you can succeed.”