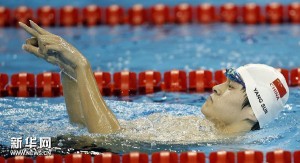 Remember swimmer Sun Yang at the London Olympics? He broke his own world record in the 1500-meter freestyle, and won another gold in the 400-meter free, joining Michael Phelps as the only male swimmers to win two individual titles.

With the success came endorsements and a hot girlfriend, but China’s poster-boy swimmer now finds himself at the center of a scandal.

According to Xinhua, Sun’s been so overwhelmed with fame and commercial interests that he’s forgotten his responsibilities as an athlete. And after skipping 40 days’ worth of training and posting pictures of his high-profile relationship on Sina Weibo, he’s been “convicted” by the Sports School of Zhejiang, where he is enrolled. He is fined one month’s allowance and temporarily suspended from all sponsorships.

Sun has also reportedly had big arguments with his coach of more than 10 years, Zhu Zhigen, who has been hospitalized for high blood pressure and thyroid nodule.

Li Jianshe, the school dean, told Xinhua, “This place is for good athletes, not for those with privileges… we have to punish him, as everyone is the same when it comes to rules.”

Sun’s popularity soared after the Olympics, and his love affair with Nian Nian, a flight attendant, trended on Sina Weibo. Sun’s coaches, to say nothing of his family, all disapproved of this relationship, and netizens have also been turning against the golden boy. @fion黎明之前 wrote, “Sun’s body is top of the line but his brain is underdeveloped.” And @不能吃我 made fun of him: “Well, he can’t be blamed. After all, it is hard to go to 5 am training directly from clubbing.” In a survey conducted on Sina Weibo, as of now, 37,000 people supported the punishment, while 7,000 voted for forgiveness.

Sun recently posted — then quickly deleted — this message: “Those who care about me, please do not hurt the one that I care about.”

Is Sun Yang falling apart? As the scandal grows, more questions will be asked. Can he be both a professional athlete and playboy? Will he be able to have fun without ruining the image of the national swimming team? Can an individual thrive in the collective mentality environment of organized sports? More likely, he will have to choose one or the other.