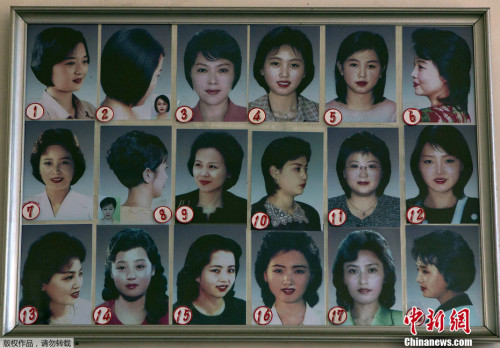 Outside a salon in the city of Pyongyang hangs a framed picture of 28 hairstyles for customers to choose from. The North Korean government has declared these the “official” styles for men and women — and what selection! 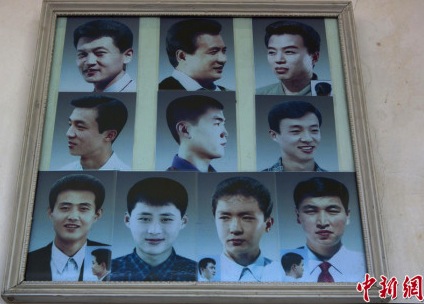 We’re all too familiar with the practices of a conformist state, but this is a throwback to an even more communist era. If you are a married woman, you have to keep your hair short and ribbon-free; if single, young ladies should keep braids; etc.

These images of approved haircuts quickly circulated on Sina Weibo. Let’s take a look at what Chinese netizens had to say about their comrades next door:

@牛奶糖赠品_：what if someone is baldheaded?

@不能吃我：it does not include my kind of hair. Guess I will be persecuted if I live in Korea.

@_JamesMoriarty: Look familiar, don’t they? Like China twenty years ago!

@ 尼马神马都是马: A woman from South Korea is the nation’s president, and women from North Korean have to abide by sanctioned hairstyles. Which country is better? Pretty obvious.

@心茶de自由: Wait, Fat Kim Jong-Un’s hair is not among these!

@造型师朱宥承: Even women have just short hair! Man, working as a hairdresser in Korea is so easy!

@songliuyu: Their government is worrying too much.

@大叮乖乖o0: I think the government of North Korea is great! They have narrowed down the options and recommended the best ones, which would save me a lot of time at the hairdresser. Ha ha!

@CamoBunny: They all look the same to me.

@我才是很拽的番茄: (answer the question “what if baldheaded?”) Well, the glory of Juche Ideology will not let such dismay as baldheadedness to happen.

@唛唛-fan: Way too strict. I can’t live in a place like North Korea.

@win0703: Do they have a set of sanctioned sex positions, too?

@东海林歌: must have taken ages for that same model to grow all those haircuts!

This campaign to limit hairstyles seems like the government’s latest effort to block the entry of Western cultural influence. In North Korea’s defense, it’s just trying to preserve its traditional beauty and prevent authentic Korean culture from being contaminated by the bad elements of capitalist culture. That’s something we can all get behind — right?

3 Responses to “How Have Netizens Reacted To North Korea’s “Official Hairstyles”? Hilariously”