Yi Ruilong, an extreme sports trailblazer in this country known as China’s “first flying man,” disappeared on Sunday evening after his hang glider crashed into remote Hanyuan Lake in Fuquan town, Sichuan province. You can watch the video of his fateful accident above, in which he loses control while trying to complete a 360-degree turn.

Witnesses aren’t sure whether Yi died on the spot, but search crews found no signs of the 70-year-old until two days later, Tuesday night, when they finally dredged up his body. He had been wearing a 10-kilogram sandbag and was strapped into a 30-kilogram glider, his friend Ling Xidong told Western China City Daily.

Yi, who hails from Shandong province, has spent the past two decades gliding over places such Shandong’s Mt. Tai, Shaanxi’s Mt. Hua, Sichuan’s Mt. Emei, Kunming’s Western Hills, et al. In the 1980s, he reportedly made a delta wing glider by himself.

Authorities are still investigating how such an experienced glider could have met such a tragic end. 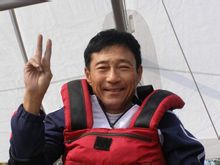