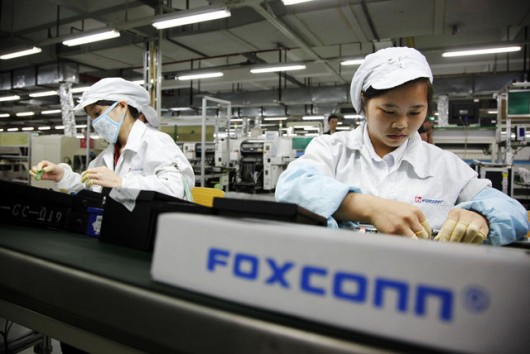 “[The government is] likely worried about industrial unrest. It’s clear they want to get workers [away from protesting in] the courtyard and to the negotiating table,” says Auret van Heerden, chief executive of the Fair Labor Association, the US-based group working with Apple and assessing working conditions at Foxconn. “It appears the Chinese government is more and more concerned that [official] unions have been asleep at the switch.”

One idea now being floated is to allow Foxconn workers democratically elect their own union leaders. The FT article continues:

Foxconn is paving the way for the first-ever competitive union elections among its 1.2m workers, alongside the Chinese government’s push for collective bargaining and wider worker representation.

Obviously this is unusual in China, which already has an official nationwide labor union. But the All-China Federation of Trade Union is a top-down organization run by the government without the independence needed to be effective. According to NPR:

Labor unions technically do exist in Chinese factories, but they’re typically controlled by management and the government. So a union run by democratic vote of the workers would be a huge shift.

Why would the Chinese government be behind such a surprising move? FT:

The trigger was a strike at Honda’s plants in southern China in the summer of 2010 that highlighted the problem of having a union allied with management. During the strike, young workers jeered at and scuffled with ACFTU leaders, saying they had never seen them before. Since then, local governments in southern China have been pushing companies to hold genuine union elections. The Shenzhen municipal government was first in early 2012, followed last month [January] by Guangzhou.

Foxconn wouldn’t be the first company in Shenzhen to elect their own leaders.

At Ohms Electronics (Shenzhen), a small affiliate of Panasonic, workers directly elected their union leadership for the first time last May. “Their vote deserved being called democratic, but that’s really the only example we know of,” says Cheng Yiyi from Students & Scholars Against Corporate Misbehavior, a Hong Kong-based labor rights group.

These are extraordinary developments in a country without a democratic tradition, so progress will likely be uneven and gradual, if not altogether slow.

People involved in the preparations say that simply educating staff about how the vote will work, what their rights are and what the responsibilities of the resulting union committees are will be a huge challenge. Reaching all its employees may take longer than the 13 months the average production worker stays at the company.

Nevertheless, the hope is that the restless workers at Foxconn are beginning to make their voices heard and are leveraging their position as makers of the world’s most popular product into real social change.