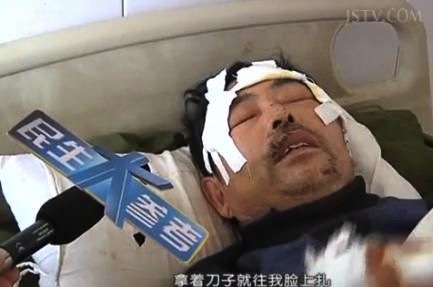 On the evening of February 15, a university student in Kaifeng, Henan province tried to scalp his mom and dad at a traditional Chinese medicine hospital, according to NetEase. How antiquated is that?

It was a bad Spring Festival for the Zhou family. On February 10, young Zhou got into a money dispute with his parents and wounded his father with a knife in the process. Five days later, his mom was visiting his father in the hospital when Zhou attacked again. This time, we’re told, he stabbed his mother and then tried to remove her scalp.

The mother is currently in a coma in the intensive care unit.

The father, interviewed in the below video, said he had a tendon in his hand severed. He described how a large chunk of his wife’s head was pared off — while she was alive.

A family relative says the child doesn’t usually keep in touch, but whenever he returns home, he asks for money. That was perhaps the cause of the dispute: the father wanted his son to be self-reliant.

It’s a heartbreaking story: the parents (and entire family, probably) work to send their child to college, only to see him repay them by trying to take their scalps. The father, in the hospital bed, breaks down and sobs just before the two-minute mark.

One Response to “Headlines You Don’t See Every Day, Except Maybe If You Live In Henan: “Man Scalps Parents””