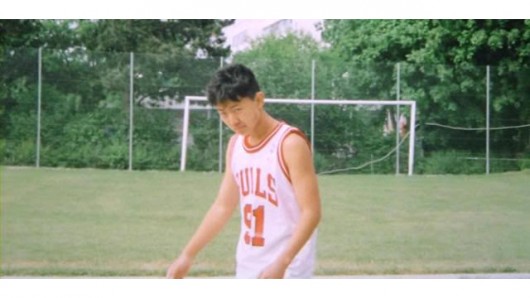 Pictured above, flagged by Gawker via Daily NK, is Kim Jong-un, the dictator as a young man during his days at a Swiss boarding school. How exceptionally notable is it that from a team with Michael Jordan and Scottie Pippen, he chose to don the No. 91 jersey belonging to Dennis Rodman?

We’re reminded of this AP report back in 2009: “A classmate recalled him as timid and introverted but an avid skier and basketball player who was a big fan of the NBA star Michael Jordan.” Ah, so maybe Kim was just a sports hipster?

Whatever the case, here’s your reminder that Dennis Rodman — The Worm, The Weird One — is currently in North Korea with VICE and, in all likelihood, killing it. You can follow his adventures at the hashtag #WORMinNorthKorea.

We can’t wait for his sit-down with the man — now all grown up — pictured above: